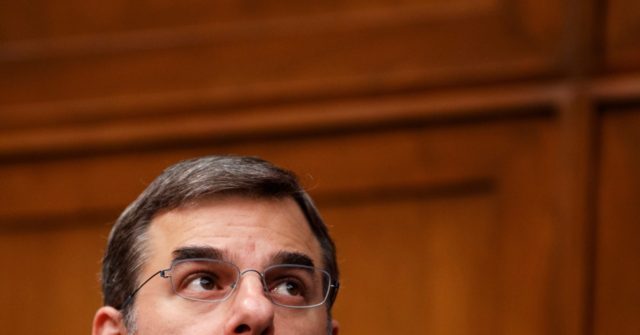 Rep. Justin Amash (R-MI), the Michigan Never Trump GOP congressman who recently publicly backed impeachment of President Donald Trump, is now underwater in his own district according to a poll obtained exclusively by Breitbart News.

Amash is polling at just 17 percent in the GOP primary, trailing State Rep. Jim Lower by double digits. Lower, who announced his candidacy as Amash revealed his support for impeaching Trump, is at 27 percent–a 10-point lead over Amash. What’s more, another Amash challenger, State Rep. Lynn Afendoulis, is tied with the congressman for 17 percent–meaning one challenger to the incumbent representative is beating him by double digits and a second is already tied with him.

Another challenger, activist Tom Norton, is at 5 percent in this poll. Pete Meijer, the heir to the Meijer supermarket chain fortune who just announced his candidacy on Wednesday, polls at just 4 percent in this survey. Thirty percent of respondents were undecided.

The poll, conducted by Strategic National, surveyed 400 likely Republican voters in Michigan’s third congressional district from June 29 to July 1 and has a margin of error of 4.89 percent.

Another potential candidate, businessman and real estate developer Joel Langlois who owns the DeltaPlex facility in which President Trump has held rallies as well as manufacturing companies, is also considering running for the seat, sources familiar with the matter tell Breitbart News, but he was not polled in this survey.

Strategic National has a track record as a political consulting and polling firm for getting Michigan politics correct. In fact, it was the only firm in the nation to correctly call the Michigan victory by President Trump over Democrat Hillary Rodham Clinton in 2016, publishing a poll showing a tie between the two in the final days of the election. The GOP firm, which represents various clients around the country, does not currently have a horse in the race in Michigan’s third congressional district–but says in a release it reserves the right to take one on and may do so down the road.

Amash backed impeachment of President Trump back in late May on Twitter, with a series of tweets laying out his reasoning.

People who say there were no underlying crimes and therefore the president could not have intended to illegally obstruct the investigation—and therefore cannot be impeached—are resting their argument on several falsehoods:

Right afterwards, Lower announced he would be challenging Amash in the primary and surged in the race in polling with the help of significant media attention on his candidacy including especially from Fox News. Lower has framed himself as a pro-Trump candidate, and while his position at this time is strong sources familiar with the race say that should Langlois enter the race he could take the mantle quickly with his vast resources and deep ties to Trump.

In fact, Trump held rallies in Langlois’ DeltaPlex facility as far back as 2015, when Trump praised him from the stage of the rally there in Grand Rapids:

What’s perhaps even more interesting is that three of the other candidates–Afendoulis, Meijer, and Norton–all have ties into the same Never Trump community that voters are furious with Amash over. Lower has accused Norton of being Never Trump, exposing old Facebook posts from Norton from 2016 saying he would not vote for Trump against Clinton when Trump became the presumptive GOP nominee. Afendoulis similarly made a series of Never Trump comments in 2016, according to a press release from Lower’s campaign, including calling both Trump and Clinton “batshit crazy” after Trump won the Michigan primary in March 2016.

She also according to Lower’s press release (see link below) made a series of negative comments throughout the general election about Trump, saying Americans would be better off dead than with him as president.

Meijer, meanwhile, has his own deep history with Never Trump and leftist causes. In October 2016, three weeks before the general election, Federal Election Commission (FEC) records show that Meijer donated $250 to an organization that was formed to stop President Trump from defeating Clinton. The organization, called “Common Defense,” says on its website it was formed by veterans in 2016 who viewed Trump as a “real threat.”

“Common Defense was born out of the 2016 U.S. presidential election when military veterans recognized Donald Trump as a real threat,” the website for the organization to which Meijer contributed says. “We knew that he could win and we mobilized to stop him. Since then, we’ve grown into a powerful movement with more than 150,000 supporters and tens of thousands of veterans and military families across all 50 states.”

In 2017, after Trump was president Meijer wrote a piece widely circulated by leftists claiming in part about Trump that his team was pushing “a backdrop of White House half-truths and outright lies.”

The same FEC records also show Meijer maxed out to Amash in 2017, contributing $5,400 over two donations to the Never Trump congressman he is considering running against now–in addition to having teamed up with, according to news reports, anti-Trump leftist billionaires Jeff Bezos of Amazon and the Washington Post as well as former New York City mayor Michael Bloomberg on a PAC that claims to be bipartisan.

Meijer’s announcement video on Wednesday makes no mention of Trump, but praises former President Gerald Ford by showing a quote from him. Ford nearly lost a primary to Ronald Reagan, who would later win the White House after Ford lost it to former President Jimmy Carter, a Democrat:

Strategic National CEO John Yob, whose firm conducted the poll, said in a release obtained by Breitbart News that there are two big takeaways from this survey: First, Amash is in serious trouble and his only real path back to his congressional seat is if Democrats cross over to vote for him in the GOP primary. Second, Yob says, Meijer is not registering–and is unlikely to given his past–so that leaves this field wide open at this stage.

“Congressman Amash has a path to victory by turning out Democrats to vote in the Republican Primary in a crowded field that isn’t represented in the topline results of the survey,” Yob said.  “The results of the Democrat portion of the survey are consistent with the strong Democrat turnout he had at his townhall meeting.”

Amash’s position is very similar to another Never Trump Republican from last election cycle, now former Sen. Jeff Flake (R-AZ)–who ended up not running for re-election given how badly he was polling in his primary at the time. Some fear that Amash may bow out–in much the same way Flake eventually did–to clear the way to try to pass the mantle to Meijer, who shares his views on the president and even retweeted Amash’s thread calling for Trump’s impeachment on his since-deleted account. But for now, Amash is still in the race.

“Pete Meijer hardly registers despite his famous last name and publicity surrounding his Bezos and Bloomberg funded political action committee that helped Democrats win control of Congress in 2018,” Yob added.  “Meijer and Amash appear to be positioned to compete for the same anti-Trump voters and hoping for significant Democrat turnout in the open primary that could be similar to McCain 2000 and Snyder 2010.”