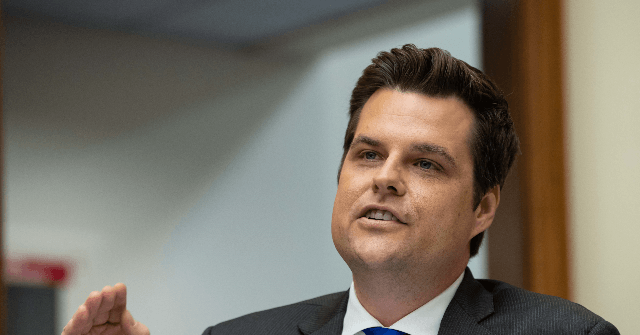 Rep. Matt Gaetz (R-FL) charged that Twitter “ought to look” in the mirror when it comes to inciting violence when they host Antifa and violent Black Lives Matter organizers, according to a copy of his podcast, which Breitbart News exclusively obtained.

On Gaetz’s podcast, Hot Takes with Matt Gaetz, the Florida populist reacted to Twitter adding a warning label for one of Gaetz’s recent tweets for allegedly glorifying violence.

On Monday, Gaetz cheered President Donald Trump’s designation of Antifa as a domestic terrorist organization, to which Twiter claimed that his tweet lauded violence.

Gaetz said, “Now that we clearly see Antifa as terrorists, can we hunt them down like we do those in the Middle East?”

Now that we clearly see Antifa as terrorists, can we hunt them down like we do those in the Middle East?

We have placed a public interest notice on this Tweet from @mattgaetz. The Tweet is in violation of our glorification of violence policy. As is standard with this notice, engagements with the Tweet will be limited. People will be able to Retweet with Comment, but will not be able to Like, Reply or Retweet it.

In reaction to the news, Gaetz said on his Hot Takes with Matt Gaetz podcast that he views Twitter’s warning label as a “badge of honor.”

The Florida congressman said, “Well, I’ll tell you this: I wear Twitter’s warning as a badge of honor, and Antifa is a terrorist organization. And, I’m not afraid to tell the truth about it, and neither is the Trump administration. These riots, they’re hurting Americans, they’re hurting real people, blue-collar people, people like the folks that I care about, who just want a chance in this country to be successful, and who deserve every right to that success if they’re willing to work hard and play by the rules to achieve it.”

Gaetz, in a previous podcast released last week, said that is working with Republican members of the House Judiciary Committee to develop legislation that would strip social media giants of their Section 230 legal immunity if they fact check content on their platforms.

He continued, “Our government should hunt down these Antifa organizers and the organizers of any group that is encouraging violence or harm to our police, to our businesses. And I will not be afraid to continue saying it on Twitter, on this podcast, on television, on every platform that I am able to access, including the floor of the House of Representatives. You know why? Because it’s true, 100 percent true, that these are organic protests; these are not circumstances where people are simply showing up and then independently all at once deciding to throw things or attack cops or try to create some senseless act of disruption or chaos. No, they know what they’re doing when they go there.”

“If Twitter wants to criticize me for glorifying violence against terrorists, maybe they ought to look in the mirror at how they contribute to that violence themselves. When Twitter allows radical ISIS extremists access to their platform to spew their hate and their just absolute lust for violence, they’ve got some accountability for that. When Twitter allows these Antifa thugs and these Black Lives Matter protesters, who, in many cases are peaceful, who are inciting violence against the cops, when they go and give them a platform, to organize and attack and strategize against the people who uphold our laws, then I think they should be held liable for that.”