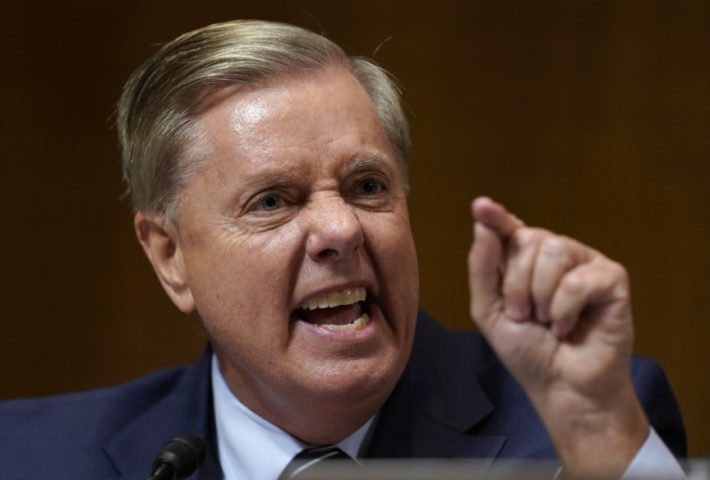 “I think they’ve taken this to a new low, when if Kavanaugh’s not rock bottom, God help us all,” he said exclusively to Breitbart News.

“You cannot be civil with a political party that wants to destroy what you stand for, what you care about,” she told CNN. “That’s why I believe, if we are fortunate enough to win back the House and or the Senate, that’s when civility can start again.”

It also came the same day former Attorney General Eric Holder called for physical measures. “When they go low, we kick ’em.  That’s what this new Democratic Party is about,” he said at a campaign event in Georgia.

Graham delivered one of the most dramatic moments during Kavanaugh’s confirmation at a Senate Judiciary Committee hearing last week, where he excoriated Democrats for attempting to derail his nomination at the last minute with uncorroborated allegations of sexual assault.

The comment came after Graham delivered an address at a dinner hosted by the Jewish Institute for National Security Affairs (JINSA) to celebrate U.S.-Israel military ties. At the beginning of his remarks, he had commented,  “We believe in the rule of law, not mob rule.”

Asked later whether he was also referring to Kavanaugh’s confirmation, he affirmed that he was, but also tied his remark to the Middle East.

“There’s a process in the civilized world to arrive at decisions. Democracies don’t go to war. What we’re missing in the Mid-East is more democracies. If you had democracies in the Mid-East, you’d have less war. I can’t think of any war between two democracies, so the point here is that democracies are held together by the rule of law,” he said.