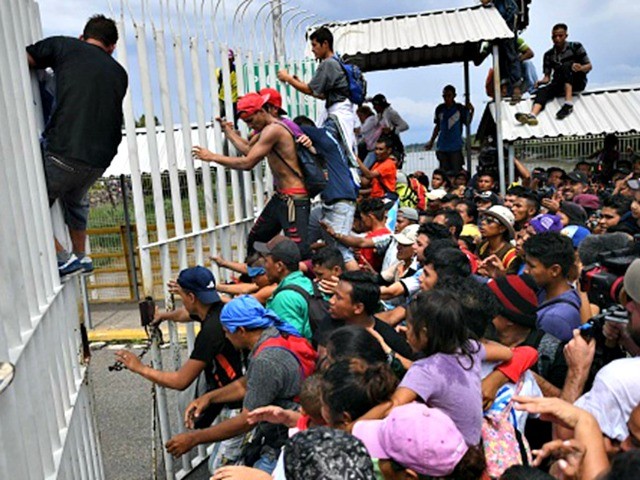 Kansas Secretary of State Kris Kobach says it is “imperative” that “no one” from a caravan of 7,000 to 10,000 Central American migrants be allowed to enter the United States.

In an interview with SiriusXM Patriot’s Breitbart News Tonight, Kobach said President Trump’s administration must ensure that all migrants with the caravan be kept out of the U.S. in order to send a clear message to the world that the U.S. will enforce its immigration laws.

It is imperative that no one should get through. That the entire, what is it now, over 8,000 should be thwarted unless there’s someone who truly qualifies for asylum, but we have yet to see that … but everybody else needs to be thwarted in their attempts to illegally enter the United States or game the asylum system. [Emphasis added]

That will send a message back to these home countries saying ‘Hey, don’t try another asylum. Look what happened for these people last time. It didn’t work for them.’ The decisions we make now will have consequences in the future. [Emphasis added]

Kobach said the GOP Congress must approve full funding for Trump’s proposed border wall along the U.S.-Mexico border, saying, “We do need the wall” and that “the [American] public wants a wall.”

“I think it’s a winning issue,” Kobach said of a potential government shutdown in order to secure border wall funding.

Though illegal immigration has soared in recent months at the U.S.-Mexico border, President Trump is only pushing to secure a fifth of border wall funding in a spending package that must be passed before the end of the year to avoid a government shutdown. At the same time, illegal immigration levels at the southern border are projected to reach the highest level in a decade next year.