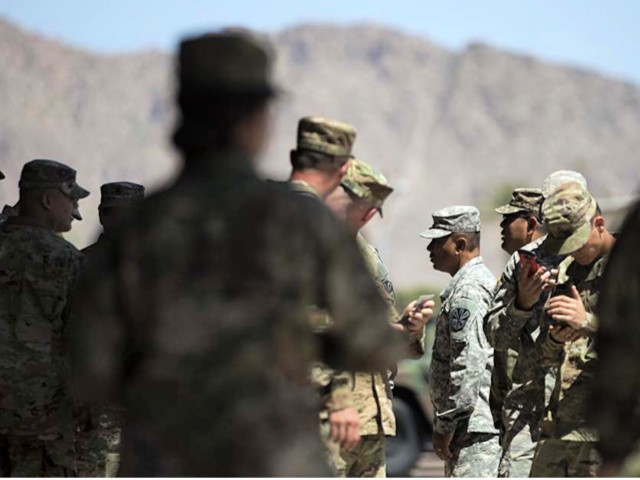 President of the Senate Conservatives Fund and former Attorney General of Virginia Ken Cuccinelli says the United States Constitution uniquely gives states the authority to stop the “invasion” of a migrant caravan headed to the U.S.-Mexico border.

In an exclusive interview with SiriusXM’s Breitbart News Daily, Cuccinelli explained to Breitbart News Political Editor Matt Boyle how the states can halt the 7,000-strong migrant caravan that is marching to the U.S. through Mexico, designed to overwhelm the country’s asylum and immigration system.

Article 1 Section 10 of the Constitution, third paragraph, lists some things that the states can do under some certain circumstances. And [the Constutition] says that no state shall enter into war without the permission of Congress unless they are actually invaded. Well, here it comes. [Emphasis added]

First of all, we’ve been being invaded for a long time so the border states clearly qualify here to utilize this power themselves. And what’s interesting is they don’t need anyone’s permission. And because [the states are] acting under war powers, there’s no due process. They can literally just line their National Guard up — presumably with riot gear like they would if they had a civil disturbance — and turn people back at the border. Literally, you don’t have to keep them, no catch-and-release, no nothing. You just point them back across the river and let them swim for it. Maybe you have a little courtesy shuttle and drive them over … and leave them there. The states can do that, interestingly enough, and the federal government can’t. [Emphasis added]

When someone comes across your border without your permission, it’s an invasion. Their purpose here is to violate the border, to violate our sovereignty for their own purposes. That’s an invasion. And here, I don’t think with the caravan it’s even debatable because you’ve got an entire group that’s organized itself to come into the country. [Emphasis added]

Breitbart Texas reported that the migrant caravan stormed through Mexico last week, tearing down a border barrier in the process as they crossed from Guatemala to Mexico.

Rep. Louie Gohmert (R-TX), similarly, has called on Trump to use his full executive power to stop the migrant caravan “invasion,” saying, “In an emergency situation, he has additional powers,” as Breitbart News noted.