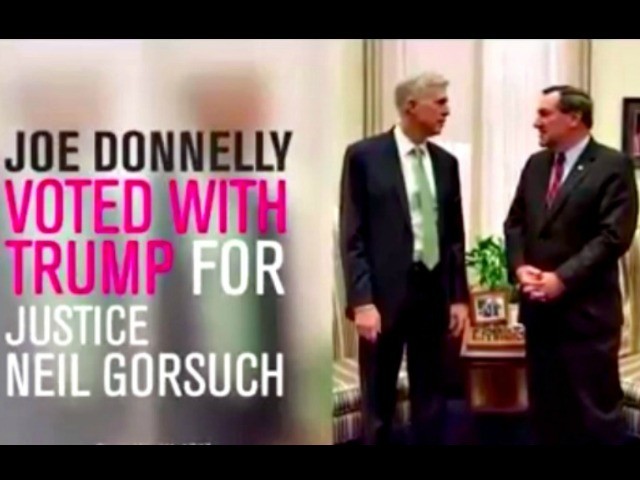 The Indiana Republican Party will, on Thursday, slam Sen. Joe Donnelly (D-IN), a vulnerable Democrat up for re-election, for what it says–and Donnelly’s own campaign spokesman admitted–is an illegal use in a campaign ad of an official U.S. Senate photograph of Supreme Court Justice Neil Gorsuch and Donnelly standing together before Gorsuch’s confirmation.

Ahead of its public release, Breitbart News has obtained a statement from the Indiana GOP chairman and a letter the Indiana GOP sent to the U.S. Senate Ethics Committee alleging Donnelly’s campaign engaged in illegal activity that also violates Senate Ethics Rules for using the official Gorsuch photo in his campaign advertisement airing on television.

In the television ad that Donnelly is airing in Indiana, Donnelly touts his supposed closeness with President Donald Trump.

“I have a 99 percent attendance record–but it’s not just about showing up,” Donnelly says in the ad, speaking directly into the camera. “It’s about delivering for Hoosiers.”

Then a narrator comes on and says Donnelly “broke with his party and voted for Trump’s border wall three times,” and then the narrator says: “And Joe voted for the president’s first Supreme Court Justice, Neil Gorsuch.”

At that point, on screen is an official photograph of Donnelly standing with Gorsuch from their official U.S. Senate meeting when Gorsuch–Trump’s first selection to the U.S. Supreme Court in the first year of his first term–was in the confirmation process. Donnelly ended up voting for Gorsuch, but Donnelly would later–in 2018, Trump’s second year–vote against the president’s second selection to the U.S. Supreme Cour, now- Justice Brett Kavanaugh.

The official Senate photo of Donnelly with Gorsuch first appears at about 14 seconds into the above ad.

This is significant for a number of reasons. Donnelly demonstrated he was in the end part and parcel of the radical leftist Democrat Senators’ unsuccessful ploy to attempt to take down Kavanaugh with uncorroborated smears and baseless, evidence-free allegations. Secondly, and perhaps more importantly, during the confirmation process of Kavanaugh, Donnelly’s team also filmed and photographed the official U.S. Senate meeting the Democrat senator had with Kavanaugh before he announced he was a no. At that time, it was expected Donnelly may, as he did with Gorsuch, eventually vote in favor of Kavanaugh’s confirmation.

When it was revealed publicly that Donnelly and his official Senate staff used government resources to film and photograph the meeting, the Indiana GOP cried fou,l warning Donnelly against using such materials in campaign advertisements. In a Breitbart News exclusive at the time, Josh Kelley, the spokesman for Donnelly’s GOP challenger businessman Mike Braun, hammered Donnelly for serious ethical lapses with regards to the footage:

Career politician Joe Donnelly blocked cameras from his meeting with Judge Kavanaugh, but that didn’t stop him from secretly filming the meeting so his buddy Chuck Schumer and other liberals could use the footage for political ads. This behavior reaffirms that Donnelly will vote for Kavanaugh once his confirmation is secured, and his taxpayer-funded office creating footage for campaign ads borders on serious ethical issues.

Taken aback by the forceful condemnation of their tactics and use of government resources potentially for campaign purposes, Donnelly’s spokesman pushed back at the time in a local news report, actually admitting that use of those photographs or videos from the Kavanaugh meeting in any Donnelly campaign ad would be outright “illegal.”

“This nakedly political stunt is just the latest bald-faced lie from Rep. Braun’s campaign. The fact of the matter is that Donnelly for Indiana has no intention of using that footage in an ad — but more importantly, even if the campaign or any outside group wanted to use this footage, it would be illegal,” Donnelly campaign spokesman Will Baskin-Gerwitz said, per the Journal-Gazette in August of this year.

Donnelly ended up voting against Kavanaugh in the end, so that footage and those photos were useless politically for him and he is paying dearly for the move back home in Indiana with just weeks to go before the Nov. 6 midterm election. But that raises the question: Would the same behavior Donnelly’s team says is illegal regarding Kavanaugh be equally illegal with another Supreme Court Justice, like Gorsuch?

And that’s where the Indiana GOP comes in, with regard to this new ad that Donnelly is hitting airwaves with in Indiana featuring an official photograph of the senator and Gorsuch. In a statement that will be released publicly on Thursday morning but was provided to Breitbart News exclusively on Wednesday night,  Indiana GOP chairman Kyle Hupfer unloaded. Hupfer said in the statement.

Democrat Joe Donnelly is so desperate to fool Hoosiers into thinking he’s a not a liberal Democrat, he’ll violate Senate ethics and break federal law to do it. Even his own spokesman admitted it’s illega. Back in August, Democrat Donnelly’s campaign said politicizing the confirmation of a Supreme Court Justice would be a disservice to Hoosiers. Since then, Donnelly’s Democrat Party has led a three-ring circus to delay and destroy Justice Kavanaugh. Now, as Donnelly is illegally abusing taxpayer resources to politicize a Supreme Court nominee to save his job, Hoosiers can see it’s Donnelly who’s doing them a real disservice. Today, I am filing a formal complaint with the Senate Ethics Committee to investigate Senator Donnelly’s flagrant abuse of taxpayer dollars in a desperate bid to get re-electeqed. In the meantime, Donnelly’s campaign must immediately cease running this ad and issue a public apology to Hoosier taxpayers.

Federal law and Senate Ethics Rules make clear that official resources may only be used for official purposes. The General Appropriations Statute, 31 U.S.C. § 1301 states that ‘appropriations shall be applied only to the objects for which the appropriations were made except as otherwise provided by law.’ This Committee has made clear that this statute means ‘it is thus inappropriate to use any official resources to conduct campaign or political activities.’ Additionally, ‘Senate space, equipment, staff time and resources generally should not be used to assist campaign organizations.’

The letter cites the Senate Ethics manual and various federal laws to make its case. The Indiana GOP wrote, citing a 1982 case.:

Federal case law has also affirmed that ‘Congress has recognized the basic principle that government funds should not be spent to help incumbents gain reelection. Senate Internet Services and Technology Resources Usage Rules adopted by the Senate Rules Committee also state that the use of Senate Internet Services and Senate technology resources for campaign purposes is prohibited.

The letter also quotes the Donnelly spokesman admitting that such behavior would be illegal and says that the Indiana GOP agrees with Donnelly’s spokesman about that:

It remains to be seen where this goes from here, but this does not appear to be a positive development for Donnelly.