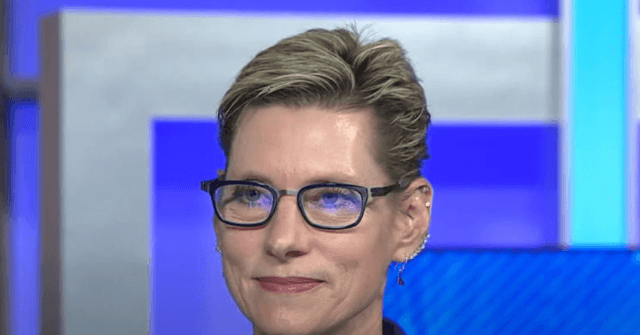 “[In] a lot of conservative areas, there’s this attack that’s going on — and we’re seeing things slipping in,” said Rep. Nichols on Saturday. “Idaho has been one of the fastest growing states in the nation, so we’ve been getting people from all over, moving to our state.”

“We had a new president for Boise State [Marlene Tromp] that was selected to take over,” continued Nichols, “and we got a hold of an email that was sent out after she took her position — changes she wanted to make [to the university] — and as we started looking through this email, we became really concerned.”

“Because a lot of the things that are being brought in are things that we’re seeing happening in other states,” said Nichols. “Diversity programs, and [racially] segregated graduations, and gender inclusive equity centers, things along those lines.”

“And we just had recently — within this last week — a report that came out,” she added, “they’re going to be remodeling the student union building, and they want to incorporate gender inclusive restrooms throughout the building and that their plan is to eventually do that throughout the whole campus.”

Boyle mentioned that the school’s student newspaper recently reported that the remodeling will also include “permanent prayer space for all.”

“So in other words,” said Boyle, “what they’re doing now is they’re going to having essentially Muslim prayer rooms on the campus of Boise State University?”

“And that’s what we’re saying,” said Nichols, “where is this stuff coming from? Why are we bringing this into [our school]? This has nothing to do with educating, this is political correctness running amok — why are we doing this? What are we catering this to?”

While the “prayer space” is being advertised as an area on campus that “will accommodate all religions,” the student newspaper does acknowledges that the new space had only been deemed a necessity after the “dramatic influx of new students from Saudi Arabia and Kuwait” and the “growth of the International Student Association and the Muslim Student Association.”

“As Muslims, you have to pray five times a day,” said Muslim Student Association president Muhammad Kamrin Latif to the school’s student newspaper. “So two to three prayers will be during school time.”

Rep. Nichols also mentioned that “special scholarships for illegals” are among the new changes that university president Tromp is seeking to implement.

“And there’s been some other things coming out,” added Nichols, “they want to have the faculty and staff come learn about why whites are racist, about white privilege, and do a whole book club in regards to what does it mean to be white.”

The “white privilege” program will be based on a book by University of Washington professor Robin DiAngelo, entitled, What Does It Mean to Be White?: Developing White Racial Literacy, according to Idaho Freedom Foundation.

Earlier this year, during a guest lecture at Boston University, professor DiAngelo told students that it is “dangerous” for white people to treat everyone equally and say that they see people as individuals.

“I really think it’s going to get down to the funding,” said Nichols regarding how Idaho can fight back. “We’ve put a lot of money in, from our state, that the taxpayers are paying for to help fund these universities, and basically, we’re paying for our kids to be indoctrinated.”

“We see what’s coming out of our universities on a daily basis,” added Nichols. “the climate rallies and other protests — things that are transpiring throughout the nation — it’s a huge concern.”

“We have these kids that we’re paying to be educating and they’re being indoctrinated,” reiterated the Idaho representative, “and I think it’s going to be taking away the funding in order to change the dynamics of what’s happening in our education system.”

Nichols also mentioned the three steps she would like to see taken in order to counteract the leftist dogma being implemented in Idaho schools.

“First, you have to expose it — expose what’s going on and not be afraid that you’re saying things maybe aren’t the most politically correct for the current dynamic in our political system. Second — it’s important for people to get involved — people need to start making an effort to really know what’s happening in their current government system, locally, and especially the state level. And third — money talks. I really believe that we need to start taking the money away when we have this sort of stuff transpiring in our education system — if we don’t like what’s going on, then maybe we shouldn’t be funding it.

“There’s not lot of accountability,” said Nichols of the manner in which schools have been using taxpayer dollars. “I think that needs to change.”

“There needs to be more accountability and more transparency on what’s happening with the tax dollars,” affirmed the representative, “so that we can see if we’re getting a good return on the dollars that are being given and if they’re using them appropriately.”

In July, twenty-eight Idaho state legislators issued a letter to the university president regarding the new programs that Tromp is establishing at Boise State, which state legislators say are “antithetical to the Idaho way.”

Some of those antithetical initiatives include the following:

“This drive to create a diversified and inclusive culture becomes divisive and exclusionary because it separates and segregates students,” wrote Rep. Barbara Ehardt (R-Idaho Falls) in the letter. “These initiatives by nature highlight differences and suggest that certain groups are treated unequally now — and that BSU should redress these grievances.”

The letter went on to state that in addition to causing division among people, such programs are also to blame for rising costs of college tuition.

“[Our constituents] rightly note that tuition hikes put degrees out of reach for the average Idaho student,” wrote Ehardt. “The cost of college is a factor in some students dropping out. Yet instead of looking to assist our students, Boise State is adding unnecessary costs.”