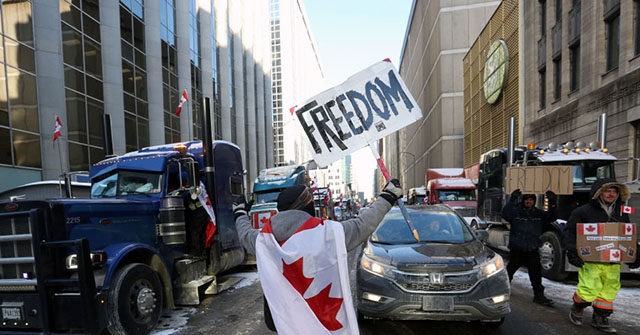 Canadians have suffered with a political “uni-party” with no true opposition for too long, Freedom Convoy leader and spokesman B.J. Dichter told Breitbart News.

Explaining that the “uni-party” in Parliament has become a coalition of “communist Liberals” and “socialist Conservatives” working in tandem to effectuate authoritarian coronavirus mandates, Dichter said that the Freedom Convoy represents the only true opposition, which is rooted in the will of the Canadian people.

“The reason we are now out-fundraising any political party in Canada’s history is because people don’t have a vote, but you know, they can vote with their money,” he explained. “And they can say, ‘These guys on the other side, hard-working Canadians in the trucking industry, they’re speaking up for us — that’s the opposition.’ They’re giving us money not because they think we need all of this money for the truckers; they just want a voice, and that’s become the voice.”

The Freedom Convoy movement has proliferated to many cities and towns in Canada, defined by a large presence of peaceful protesters and trucks that symbolize the working class. Over the weekend, however, Ottawa — the central protest location — has seen its police crack down on protesters, declaring a “state of emergency.”

Videos of supply confiscations emerged, and Ottawa police warned that “anyone attempting to bring material supports (gas, etc.) to the demonstrators could be subject to arrest. Enforcement is underway.”

Describing the Ottawa city council as “communist,” Dichter told Breitbart news that “the only thing communists know is to get violent and double down.”

The authoritarianism for Dichter and many Canadians does not just exist among Liberal Party politicians, he explained, it is also boosted by the Tories who have gone along with the mandates.

“Let’s not just lay the blame solely at the feet of Justin Trudeau,” he said. “And that’s why [former Conservative Leader of the Opposition] Erin O’Toole was such a failure as leader, because he was chasing Justin Trudeau off the communist cliff, like both of them are farther left than [former Prime Minister] Jean Chrétien.”

O’Toole was ousted as Conservative leader toward the beginning of the convoy, after just 18 months in leadership, and replaced with Candice Bergen as interim leader.

The political class in Ottawa is not the only place where Conservative leadership has capitulated to authoritarian rule, Dichter told Breitbart News, explaining that provincial premiers are “trying to play it both ways.”

“The premiers who have done these extreme lockdowns have been: [Ontario Premier] Doug Ford, Conservative; [Alberta Premier] Jason Kenney, Conservative; [Nova Scotia Premier] Tim Houston, Conservative; [Saskatchewan Premier] Scott Moe, Conservative,” he said. “So let’s not play this game that, ‘Oh, it’s only the Liberals and it’s not the Conservatives.’ No. It’s the political class that needs to be purged of this garbage.”

“Unfortunately, the political class we have now doesn’t make decisions. They just look at polls. That’s all they do,” Dichter continued. “It’s frustrating that none of them will use their moral skill to make decisions.”

“Jason Kenney is a perfect example of that,” he explained in response to some premiers toying with the idea of reducing or even cancelling the mandates. “So they [the political class] see that we’ve managed to shift public perception almost 40 percent in a week. So they’re scared, they know they got to do something. But they haven’t gotten all the polls, they need to tell them which message they need to say.”

“So in the case of Kenney in Alberta, I think you can see why Kenney has been hated from the very day he weaseled his way into leadership of the UCP party, and then ultimately as Premier,” he continued. “Many people have told me, since he got in office, he’s the best of two evils. … They never would have anticipated the degree of lockdowns and restrictions that Kenney brought in.”

As another example, Dichter said, “[Quebec Premier François] Legault, who is a Conservative by the way, a populist conservative, has been to the point of Mussolini — like really crazy restrictions on people like absolutely unacceptable in any sort of liberal democracy.”

When asked how Canada was able to become so authoritarian in his eyes, Dichter pointed to two political realities.

“Canadians are somewhat passive,” he said, relative to their American neighbors. “We’re not confrontational until things get really bad or we’re in a hockey rink.”

“But there comes a point where Canadians get pushed too far,” Dichter continued. “Just so happens that our line is a lot farther than Americans. It’s just the difference of culture between our two countries, right? And it’s not about one’s better than the other, it’s just two different approaches.”

The other political reality is geographical.

“Remember how spread out Canada is,” he explained noting a large dichotomy between cities and rural areas and their propensity to follow government mandates. “It’s larger in landmass than the United States, but it has ten percent of the population. You can be in a province that has heavy restrictions, according to the government, but you’d be in rural Ontario, and we get the most draconian lockdown measures, and nobody there is going to pay attention to it.”

“Everybody’s just gonna ignore it,” he asserted. “They’re strong people, they don’t care what the government says — they’re going to think the government is lying to them anyway.”

But a breaking point came, especially for truckers, and Canadians across the country joined in to fight back.

“It clearly started with truckers and has expanded beyond that,” Dichter told Breitbart News. “I think what you’re seeing in all the videos across the country, you know, those people standing on the side of the road with their families and the kids waving by truckers, those people aren’t truckers, but they’re people who don’t have a voice, and that’s what this is about.”

“So yeah, it started with truckers because they have, you know, the symbolism of a truck of being working class having a large presence,” he continued. “So it really is an imposing feeling against the people in a major urban center where these people — you know how the urban elites, they have this worldview, in urban centers, and they have this worldview towards rural communities. And, you know, New York is the same way: a little bit smug and look down upon the working class and rural communities. But now they have no choice. They can’t ignore them because there are 20,000 pound rigs parked right in front of their apartment buildings.”

To Dichter, their demands of the government are “pretty simple” and remain the same.

“Our demands are we want to remove the mandates by the government; the lack of freedom of choice,” he said. “And we want the digital Passport System abolished that we know, in our mind, is a slippery slope toward authoritarianism and social credit.”