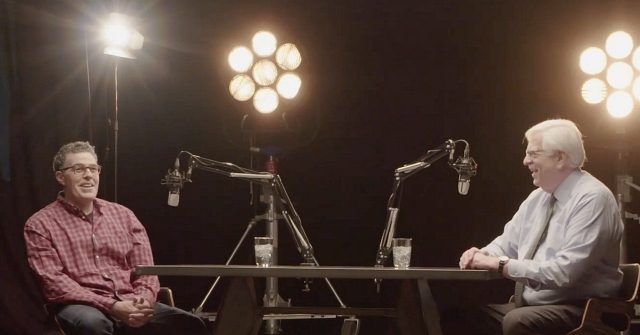 Nationally syndicated radio host Dennis Prager shared a clip exclusively with Breitbart News of his upcoming film, No Safe Spaces, a documentary detailing the ongoing assault on the First Amendment on college campuses across the country and how identity politics enables it.

In the flashback scene, an actor playing a 21-year-old Dennis Prager is seen singing to keep himself “sane” while sitting in a Moscow hotel.

“In order to keep myself sane, I would make myself laugh or do silly things. So in my Moscow hotel — which I knew was bugged — and how did I know? It’s very simple. They didn’t allow any Soviet citizen to stay in the same hotel as a Westerner. And everybody knew, including Soviet citizens, they were bugged,” Prager narrates during the scene.

“So I would get up in the morning and I would sing this song” Prager continues, singing during his narration, as the clip cuts to Russian soldiers listening to a live audio feed. “And that was what I would sing at the wall of the room.”

The clip then cuts to Prager sitting in an empty studio set across from veteran comedian and podcaster Adam Carolla, with whom Prager partnered with for the film.

No Safe Spaces features footage of Prager and Carolla’s cross-country tour of college campuses where they dove deep into the root causes and the fallout from decades of politically-motivated censorship at an array of universities. The pair argue that an entire generation of minds on these campuses have been taught to eschew alternative opinions and despise debate.

In a interview with Breitbart News, Prager offered details about the exclusive clip from his upcoming movie, Carolla’s motivation to join the project, how political correctness has made comedians like Jerry Seinfeld avoid doing stand up comedy on college campuses, and why only conservatives are in the fight to eradicate censorship from Big Tech firms to the universities.

Where does this depiction of him in the Moscow hotel room fall in the context of the film and this time in his life?
“It was September 1969, and I had just turned 21 years old. Israel sent me into the Soviet Union to smuggle in Jewish religious items and smuggle out names of Jews who wanted to leave.”

You describe everyone in Moscow knowing everyone, especially westerners, were bugged. Doesn’t that seem to be the way America’s universities are headed?

“America’s universities have no need to bug anyone. There are so few dissidents – most academics are sheep – why bother? And the threat is overt – public conservative speech – not covert. So bugging is unnecessary; stifling is.”

This project seems to be a real bridge between your efforts in education at PragerU and Hollywood, with Adam Carolla. The PragerU side makes sense, but what do you think made Adam Carolla want to be a part of this project?

Adam Carolla has two of the rarest human traits: common sense and courage. That’s why. He was the ideal partner with whom to make this film.

An Asian student group at Columbia kicked an Indian Saturday Night Live writer off stage for telling Asian jokes. Do comics like Adam Carolla have any place on campus?

In fact, there is a scene in the film with Adam talking to fellow comedians about the challenge of doing comedy on a campus today. Many comedians, such as Jerry Seinfeld, have said they will not appear on college campuses. Why would they? Comedy necessitates a certain irreverence and requires an audience people to be able take good-natured digs at them and/or their groups.

Can either Big Tech censorship or campus censorship be fixed? PragerU is fighting on both fronts.

It cannot be fixed, only be defeated. And that can only happen if the left is defeated. There is a battle for liberty and for the soul of America in which the left is fighting against both liberalism and conservatism. Tragically, however, only conservatives are fighting the left. Liberals are either too naïve, too cowardly, or too brainwashed into believing their enemy is conservatism to fight for free speech and for America.