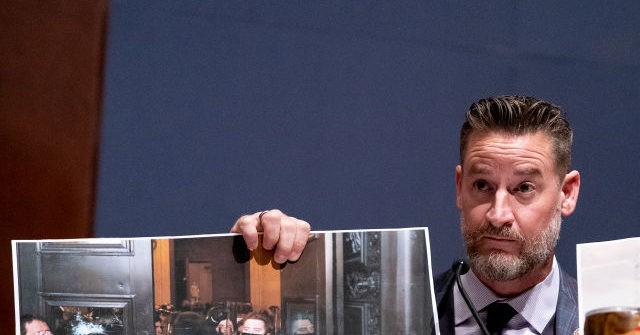 Rep. Greg Steube (R-FL) has yet to hear from the D.C. Department of Corrections, whose director he queried in July of 2021, about the status of the men and women who remain in the agency’s custody for charges related to the January 6 riot at the Capitol.

Steube is on the House Judiciary Committee, which has oversight of the nation’s federal prisons and jails in the District of Columbia.

Steube told Breitbart News that he did get a response from the Federal Bureau of Prisons (BOP), but that his inquiry to the D.C. agency has gone unanswered. His letter was addressed to Michael Carvajal, Director of BOP, and Quincy Booth, Director of D.C. Department of Corrections.

“It’s very demonstrative of a willful and intentional intent on behalf of the D.C. jail system to avoid oversight, to avoid accountability, and to avoid transparency, even with members of Congress, as to what is occurring in the D.C. jail with the January 6 prisoners. If you don’t have anything to hide, then why are you not responding to a member of Congress who sits on the Judiciary Committee, the committee that has oversight authority over the D.C. prison?”

In fact, when Breitbart News contacted the D.C. Department of Corrections, staff members said that Quincy Booth was no longer director of the department.

According to the department’s website, Thomas Faust, who previously worked at the D.C. Department of Corrections, took over as acting director on January 24, 2022. The announcement added, “Director Booth will continue to lead the Department and will serve in an advisory role.”

Breitbart News sent Steube’s letter to the new director and attempted several times to call and email the department to see if the Congressman’s questions would be addressed. The department did not respond to Breitbart News’ inquiries.

According to a Department of Justice database, scores of people were arrested, some charged, some sentenced, some released on their own recognizance, and dozens more who appear to remain in custody in D.C.

At a recent House Judiciary Committee hearing on the January 6 riot, Director Carvajal was questioned by Steube about the January 6 inmates held under his jurisdiction. Carvajal said only a small number of people are in custody.

Steube cited reports that claim January 6 inmates are being treated differently than other prisoners, including being put in solitary confinement and not being allowed to attend religious services or get haircuts.

“Congressman … everybody has equal access and are treated with dignity and have access to everything equally,” Carvajal said.

Steube said the BOP did respond to the July letter with similar remarks, but the Democrats in the House have not called officials from the D.C. Department of Corrections to testify on the January 6 inmates.

“Political motivations should not be taken into consideration when determining conditions of custody, especially for individuals who have not been convicted of a crime,” Steube said in the letter. “Yet reports have surfaced that many of the suspects arrested in connection with the January 6 protests are being held in solitary confinement or in other extreme conditions without a satisfactory explanation.”

In an extract from the letter shared with Breitbart News, Steube asked the following questions:

Steube predicted the Republicans would win a majority in the House following the mid-term elections and have a different tactic for hearings about January 6 inmates.

“When we do take control of the House, we could subpoena these people,” Steube said. “Of course, the Democrats aren’t going to do that. But when we have subpoena power, we can bring these people in and put them under oath and start asking some very tough questions.”