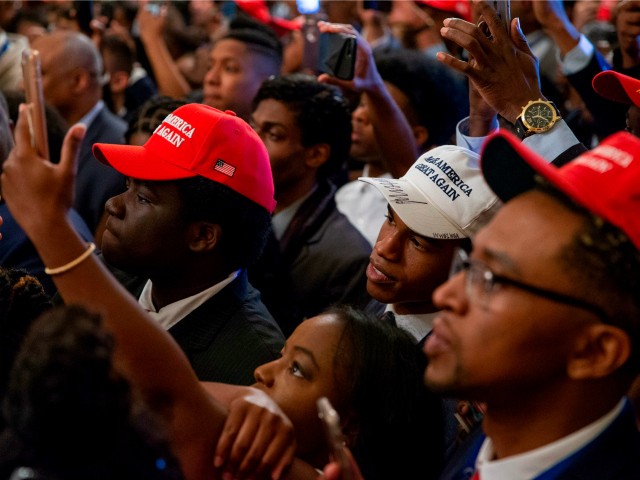 “Shame on the media for not making this the highest profile thing that’s happening,” added Kirk. “They are so dishonest. They are intentionally trying to cover this up.”

“For example, some people were covering the president’s speech yesterday. They should’ve said he was also addressing the nation’s largest-ever gathering of young black conservatives … but they were intentionally trying to obfuscate [black conservatives at the White House] because this is against their agenda.”

“My favorite moment was when the students were yelling out, ‘Thank you!’ and [the president] says, ‘Thank you.’ It’s amazing that both sides are coming from a position of gratitude. These students came from all across the country, and I was hearing testimonials of students that some had never even been on planes before, let alone go to the White House.”

“The left’s monolith on [the black community] is coming to a quick end.”

“The energy was off the charts, it felt like one of his rallies, and it was an all-black audience. The enthusiasm was incredible,” Kirk said about his experience inside the White House with the president and summit attendees. “There were students there that were sobbing and crying. They said, ‘I never thought I’d get in the White House before.’”

Kirk told Breitbart News that he hopes students leave the summit with “the courage and conviction to fight” and to not be afraid to express to others that they are supporters of President Donald Trump and conservative principles.

“The left makes it very hard to be an outward conservative. They make it intentionally hard, but it’s especially hard when you’re a young black conservative. The stories I’ve heard here, the things they’ve been called, all the names that [have] been thrown at them is so horrific, and I want to make sure every student here does not feel alone any longer.”

Kirk added that this is just the beginning and that his organization will be hosting another annual Student Action Summit this December in Florida, an event he hopes will be “the largest youth political gathering in the nation’s history.”

“The defense of [conservative] ideas is paramount right now in this culture war. And, look, the left is doing nothing like this. They’re playing victimhood. They’re doing rallies in the streets that make no sense whatsoever — totally artificial. We are going to win, and they are going to lose.”