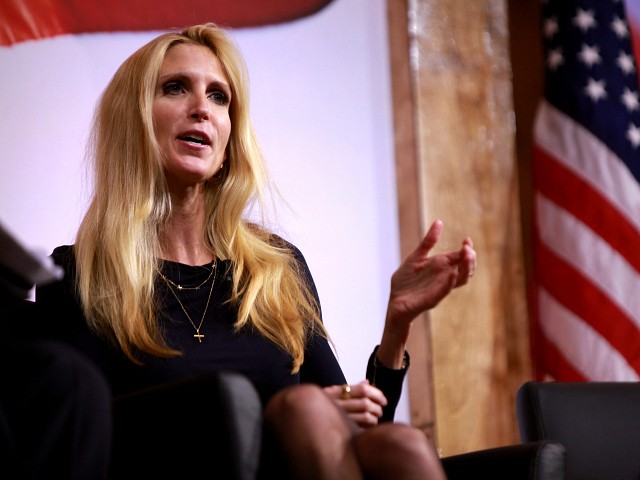 Ahead of his Oval Office address on the southern border crisis, New York Times best-selling author and populist conservative columnist Ann Coulter says President Donald Trump must make the case to the American people that the border wall is the “compassionate solution” to stopping wage-crushing illegal immigration.

During an exclusive interview on SiriusXM Patriot’s Breitbart News Tonight, Coulter said Trump must make the humanitarian case for ending illegal immigration straight to the American people, noting that amnesty for illegal aliens must immediately be ruled out.

I would also go to all of the working class that are in America, construction workers in particular. Their salaries have not just stagnated, they have gone down in the last 20 years. These are the least among us. We are the only ones not speaking out of self-interest. [Emphasis added]

Most of the people who are advocating for open borders … they have a vested in interest in having either the cheap labor or the Democratic voters. Their neighborhoods aren’t the ones being overwhelmed. They get the cheap maids, the cheap nannies, and then they strut around like they’re Martin Luther King. [Emphasis added]

No, you are talking in your self-interest, Chamber of Commerce, and Koch brothers, and Nancy Pelosi, and Chuck Schumer. It’s Donald Trump and our side who are actually caring about our fellow Americans — the kids who are getting addicted to black tar heroin. [Emphasis added]

The heroin problem in this country is 100 percent a problem of not having a wall on the border. And 70,000 Americans are dying every year. That’s more that died in the entire Vietnam War. That is a national emergency. [Emphasis added]

Coulter said Trump must make clear that it is the open borders lobby, corporate interests, and billionaire donor-class who benefit from mass illegal immigration while working and middle-class Americans are left suffering from its consequences.

“This is a national emergency for the people who don’t have lobbyists in Washington,” Coulter said.

Coulter said that aside from American workers and the country’s working and middle class, Trump should speak directly to black American communities who have seen the most adverse impact of unchecked immigration, more than any other demographic.

“I would talk about the black underclass who don’t have jobs because they are being undercut,” Coulter said. “Right as the Civil Rights bill is passed … right, as they’re breaking into the middle class and the federal government, is demanding that they be given their share of the American dream, Teddy Kennedy’s immigration act dumps 30 million low-wage workers on the country, undercutting their wages at every turn.”

Every year, the U.S. admits about 1.1 million mostly low-skilled legal immigrants, many of whom immediately become low-wage competition for America’s working and middle class. The latest data from the U.S. Census Bureau marks a nearly 108-year record high of immigration to the country. In 2017, the foreign-born population boomed to 13.7 percent, encompassing 44.5 million immigrants.