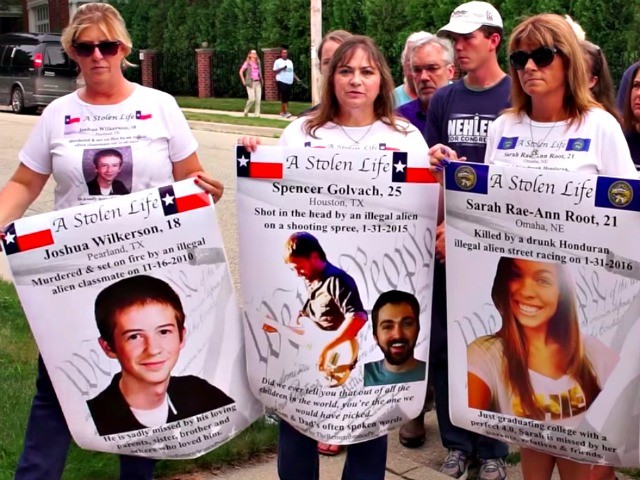 Angel Mom Julie Golvach — whose 25-year-old son Spencer was shot in the head four years ago by an illegal alien — says she is “tired of the talk” from President Trump and wants immediate action on the border and illegal immigration.

I’m tired of the tweets myself. I’m tired of saying what might happen, what’s going to happen. I want some action done. I sat in his office and announced I want action. The congressmen haven’t done anything, I want him to do action. I’m tired of the talk. Action should have been done a long time ago. [Emphasis added]

Golvach, whose son was murdered by a four-time deported illegal alien, said she wants Trump to “Stop listening and getting caught up in the swamp, yourself, and do your job” when it comes to stopping illegal immigration.

“When we were saying ‘build the wall’ we weren’t saying ‘and free them all,’ we didn’t say that,” Golvach said of a deal being floated that would give amnesty to illegal aliens in exchange for some border wall funding.

“We said ‘Build the wall.’ And that’s what we elected Donald Trump to do,” Golvach said. “That needs to be the done.”

“I’m tired of Americans’ money going to help everybody else and not taking care of Americans,” she continued.

The federal government has been partially shut down for more than 15 days now as Republicans, Democrats, and the Trump administration have yet to reach a deal to fund a wall along the U.S.-Mexico border to stop illegal immigration.

In the meantime, there have been two high-profile murders of Americans allegedly killed by illegal aliens.