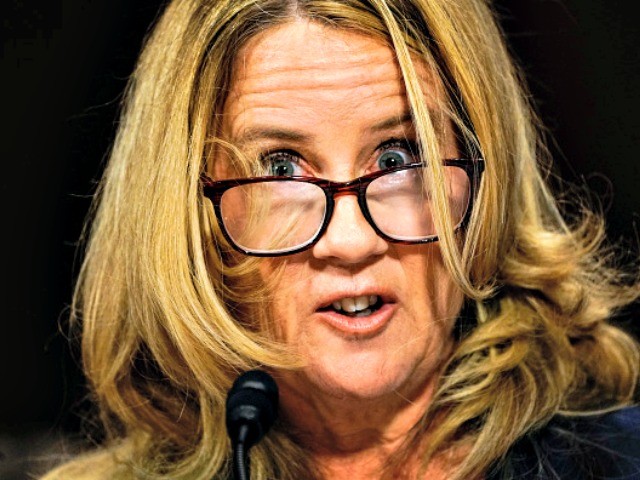 A man who dated Brett Kavanaugh’s primary accuser, Christine Blasey Ford, for six years claims she had no fear of flying, no fear of small spaces or rooms with single exits, and once used her psychology training to prepare a friend for a polygraph examination, according to a Tuesday Fox News report.

In a sworn statement to the Senate Judiciary Committee dated Tuesday, the California man claims to have met the then-Christine Blasey “in 1989 or 1990,” then had been romantically involved with her for about six years from 1992 to 1998. In that time, he claims to have witnessed Ford, then studying psychology, coach a close friend as she prepared for government administered polygraph exams. Fox News’s Shannon Bream posted a redacted version of the letter on Twitter:

The man’s claims appear to contradict Ford’s testimony under oath before the Senate Judiciary Committee last week, where she told outside counsel Rachel Mitchell that she “never” gave “tips or advice to somebody looking to take a polygraph test.”

Prosecutor Rachel Mitchell: “Have you ever given tips or advice to somebody who was looking to take a polygraph test?”

The alleged ex-boyfriend also claims that Ford frequently flew, including in small propeller aircraft, without complaint over the course of their relationship and had no fear of small spaces or rooms with only one exit. Ford’s claims that phobias of these things have plagued her since the early 1980s as a result of a 17-year-old Kavanaugh attacking her have been central elements of her story.

Further, the man claims Ford never mentioned being a victim of sexual assault in the eight years they knew each other and never once mentioned Kavanaugh’s name. Finally, he claims their relationship ended amid infidelity and credit card fraud on her part. He does, however, claim that he “finds Ford believable” and did not “want to become involved” with the investigatory process.

Exactly when the Senate Judiciary Committee staff came into possession of the letter is not clear. Mitchell’s specific questioning about polygraph prepration during Ford’s committee testimony, however, may indicate committee staff had some knowledge of the allegations laid out in the letter at least as early as last week.

This is a developing story.