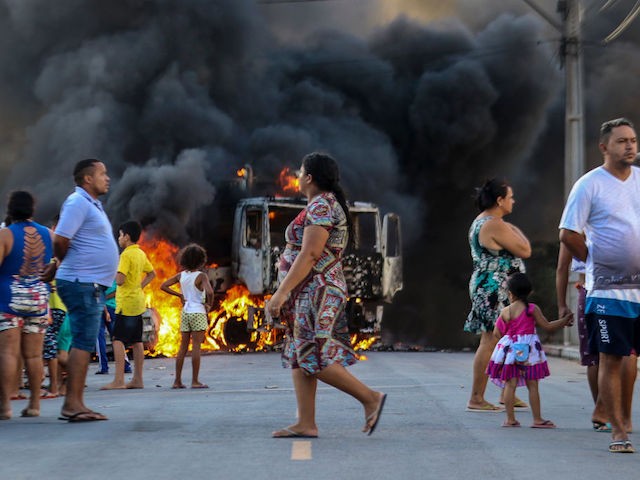 Brazil’s northern state of Ceará marked a week of unceasing rioting and vandalism, largely in its capital Fortaleza, after the nation’s criminal gangs announced a truce to destroy the city in an attempt to pressure President Jair Bolsonaro to abandon reforms to more adeptly fight organized crime.

Between last Wednesday and this Tuesday, police had documented 159 individual acts of vandalism in 39 cities throughout Ceará. Gang members have set cars, trucks, and government vehicles on fire; burned viaducts and other key infrastructure; attempted to take down government buildings; and blown up a bridge. Nearly two dozen prisoners escaped a Ceará prison this week, as well, joining their fellow gang members on the outside.

In Fortaleza, locals are struggling to continue their normal routines as the violence has impaired public transportation and shut down major businesses.

President Bolsonaro deployed 500 troops to Ceará this weekend, in addition to sending reinforcement troops from neighboring states to the region. Authorities insist they will not negotiate with the gangs involved no matter how long the violence lasts.

Members of Brazil’s three major criminal gangs – the Red Command (CV), the First Capital Command (PCC), and the State Guardians (GDE) have spread a message of unity in Ceará through graffiti posted throughout the city. An example missive, apparently by a GDE member, spray-painted on a wall documented by the Spanish newspaper El País reads in part, “My brothers and sisters, we humbly ask you to understand that if any leadership, CCP or CV arrives in our prisons, that the brothers welcome them, give them water, food, toothbrushes, clothes, and sheets.”

Another message, signed by “organized crime” with no specific name to it, reads, “As soon as you [the government] touch any of the gangs, the order is to set off general terror, set fire to banks, post offices, police stations, and overturn bridges and overpasses. We will leave the state in a state of public calamity.”

O Povo, a Brazilian newspaper reporting locally, revealed on Tuesday that it had evidence that gang leadership was paying wayward adolescents, regardless of gang affiliation, thousands of reais to engage in vandalism. The newspaper placed the price of setting a bus on fire at 1,000 reais ($268.89) and the price of a “fire of great proportions” at 5,000 reais ($1,344.48).

The campaign has left the state barely able to operate. In a report from Fortaleza, O Globo reports on Tuesday of several new attacks including the burning of buses in three cities and the burning of one car with the driver still in it. Early Tuesday morning, gang members blew up the Tapebas Bridge in Caucaia, causing a fire but failing to take the entire bridge down.

Gang members also targeted a major concert hall in the city of Eusebio, burning it to the ground. The gangs have also targeted garbage trucks for destruction, which has begun to cause a serious sanitation problem in parts of Ceará now littered with accumulated trash.

O Globo found that most businesses in Fortaleza are choosing to stay closed to avoid the wrath of the criminal gangs.

“Everyone is scared. There is no police to handle it,” one witness in the city told O Globo.

As of Tuesday, police have arrested 168 people in connection with the attacks. According to O Povo, about 30 percent of these are teens. Soldiers have killed at least two suspects in an exchange of gunfire at press time. Many have expressed concern that the arrests will be offset by prison breaks. In at least one of Ceará’s prisons, 23 inmates jumped the gate on Monday and are believed to remain at large. This break followed an incident last week where PCC members attempted a mutiny at a prison within the Fortaleza metropolitan area but failed. O Povo noted at the time that the prison in question was housing 1,200 inmates; its maximum capacity is 950.

The gang truce and subsequent war on the Bolsonaro administration, which took office on January 1, followed remarks by local Secretary of Prison Administration Mauro Albuquerque announcing he would impose stricter controls on cell phones entering prisons and end a government concession to the gangs that only prisoners of one gang would be held in each prison. This allowed the gangs to operate more freely, as they had a guarantee that any new inmates would immediately begin engaging in organized crime on their behalf upon entering the prison.

It also helped end a wave of gruesome violence in early 2018 prompted by a war between the CV and the PCC. In northwestern Manaus, prisoners began to riot and kill each other, in some cases cooking and eating the corpses on makeshift grills behind bars, beheading rival gang members, or cutting their hearts out and throwing them over the walls of the prison as a message to police not to enter.

National Public Safety Secretary Guilherme Theophilo noted in an interview that Brasilia always expected a major backlash from the gangs following Bolsonaro’s election win because he made eradicating organized crime a key part of his campaign. “There was really an indication that the prisoners and gangs were going to want to create tumult for the president since he never hid his intention of combatting criminal gangs severely,” he said.

Theophilo added that Brasilia has no intention of negotiating with gangs.