ROME — Europe’s Catholic bishops have decried French President Emmanuel Macron’s proposal to add abortion to the E.U. Charter of Fundamental Rights, insisting the scheme is “devoid of an ethical foundation.”

We would like to express “our deep concern and opposition,” declare the presidency of the Commission of the Bishops’ Conferences of the European Union (COMECE), to President Macron’s “proposal to update the European Charter of Fundamental Rights to include the recognition of a right to abortion.”

There is “no recognized right to abortion in European or international law,” the bishops insist in their February 8 declaration.

“Attempting to change this by introducing a supposed right to abortion in the Charter of Fundamental Rights of the European Union, not only goes against fundamental European beliefs and values, but would be an unjust law, devoid of an ethical foundation and destined to be a cause of perpetual conflict among the citizens of the E.U.,” they assert.

The European bishops have written a stern letter rebuking the European Parliament for its chastisement of Poland over a law preventing eugenic abortions. https://t.co/tjyRE37ibf

The five bishops who signed the statement — the president and four vice presidents of COMECE — were reacting to a call by Macron to add the “right to abortion” to the E.U.’s legally binding Charter of Fundamental Rights.

“Twenty years after the proclamation of our Charter of Fundamental Rights, which notably enshrined the abolition of the death penalty throughout the Union, I hope that we can update this charter,” Macron told the E.U. Parliament in Strasbourg on January 19, “notably to be more explicit on environmental protection or the recognition of the right to abortion.”

In its current form, the E.U. Charter declares: “Human dignity is inviolable. It must be respected and protected” and: “Everyone has the right to life.” It does not mention abortion. 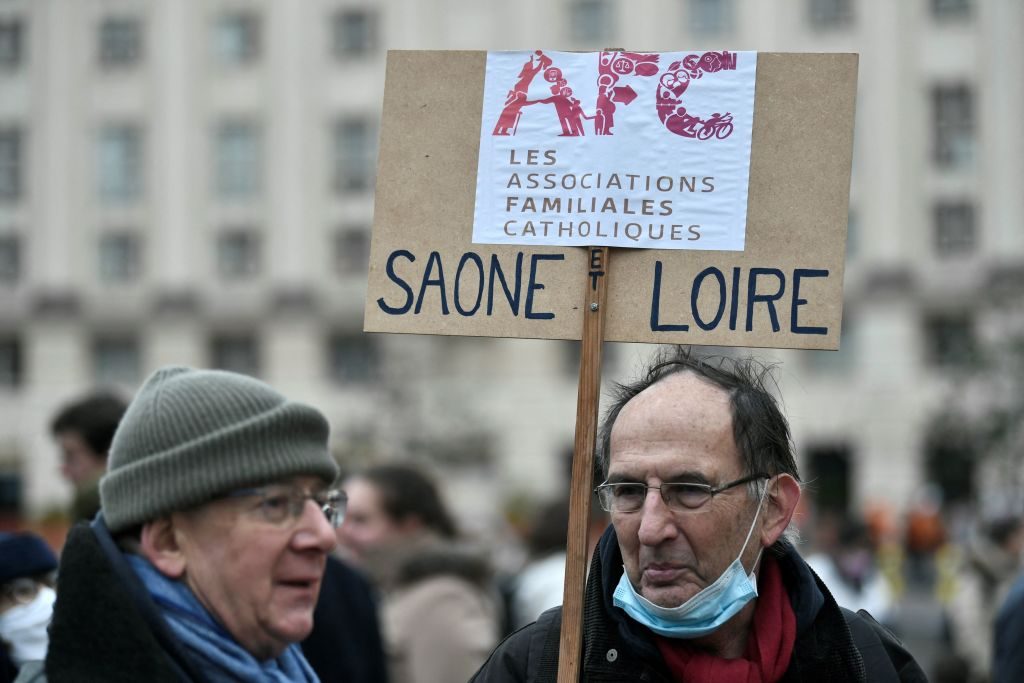 A protestor hold a pro-life placard during an anti-abortion protest in Paris on January 16, 2022. A bill on abortion will on January 19 return to the French Senate for a reading to extend the period of legal abortions from 12 to 14 weeks. (STEPHANE DE SAKUTIN/AFP via Getty)

In Tuesday’s statement, the European bishops register their agreement with President Macron on “the importance of defending and promoting the values of the European Union.”

“But we would like to point out that one of the main values is the respect for the dignity of every human person in every stage of his or her life, especially in situations of complete vulnerability, as is the case of an unborn child,” they declare.