European Council President Donald Tusk has said that the United States is not interested in a “strong, united” Europe and called nationalism a “fundamental threat” to the European Union.

The former Prime Minister of Poland turned top Eurocrat made the comments at a speech in his home country on Saturday, the day before Poland celebrated the 100th anniversary of its rebirth as an independent state, with Poles taking part in a march through Warsaw on Sunday condemned by the mainstream media as “far-right” nationalism.

“For the first time in history we have an American administration which, to put it delicately, is not very enthusiastically tuned in to a united, strong Europe,” Tusk said.

“And I say this as someone who has– let’s say — the satisfaction of having fairly frequent direct exchanges with the President of the United States.

“Maybe he’s quite open with me because we are namesakes, and I have no doubt whatsoever that in those matters which — in my view — are the geopolitical foundation of Poland’s independence, namely a strong European Union, close integration between Europe and the United States, even closer than today, and the transatlantic community, which is the essence of the global order, I have no doubt that with regard to all of this I have different views from my most influential namesake in the world.”

Tusk’s notion that his vision of Poland may be different to that of the President of the United States does appear to be shared by the current Polish administration, after the country’s ambassador to the U.S. and the U.S. ambassador to Poland penned a joint article hailing the strong ties between the two countries that have been developed under President Trump, writing that “the bond between the United States and Poland is stronger than ever.”

Tusk also criticised the rise of “nationalism,” calling it a “fundamental threat” to the EU and saying it is “illustrated most clearly by Brexit.”

“I am talking here about the rise of nationalism and anti-European, not only rhetoric, but also anti-European emotion, in many European capitals,” the European Council President said, referring to the “lunatic parade” of Eurosceptics and patriots that “began a few years ago in the United Kingdom.”

“I wish to clearly emphasise here that I see no coincidence in the fact that in virtually all of Europe, whether openly or more discreetly, those who are enthusiastic about Brexit, those who are more or less enthusiastic about Washington’s further steps towards isolationism, those who are flirting with Vladimir Putin with increasing intensity, they are all attempting, also more or less unambiguously, to persuade us that the European Union in general, or in its current shape, has no future,” he added. 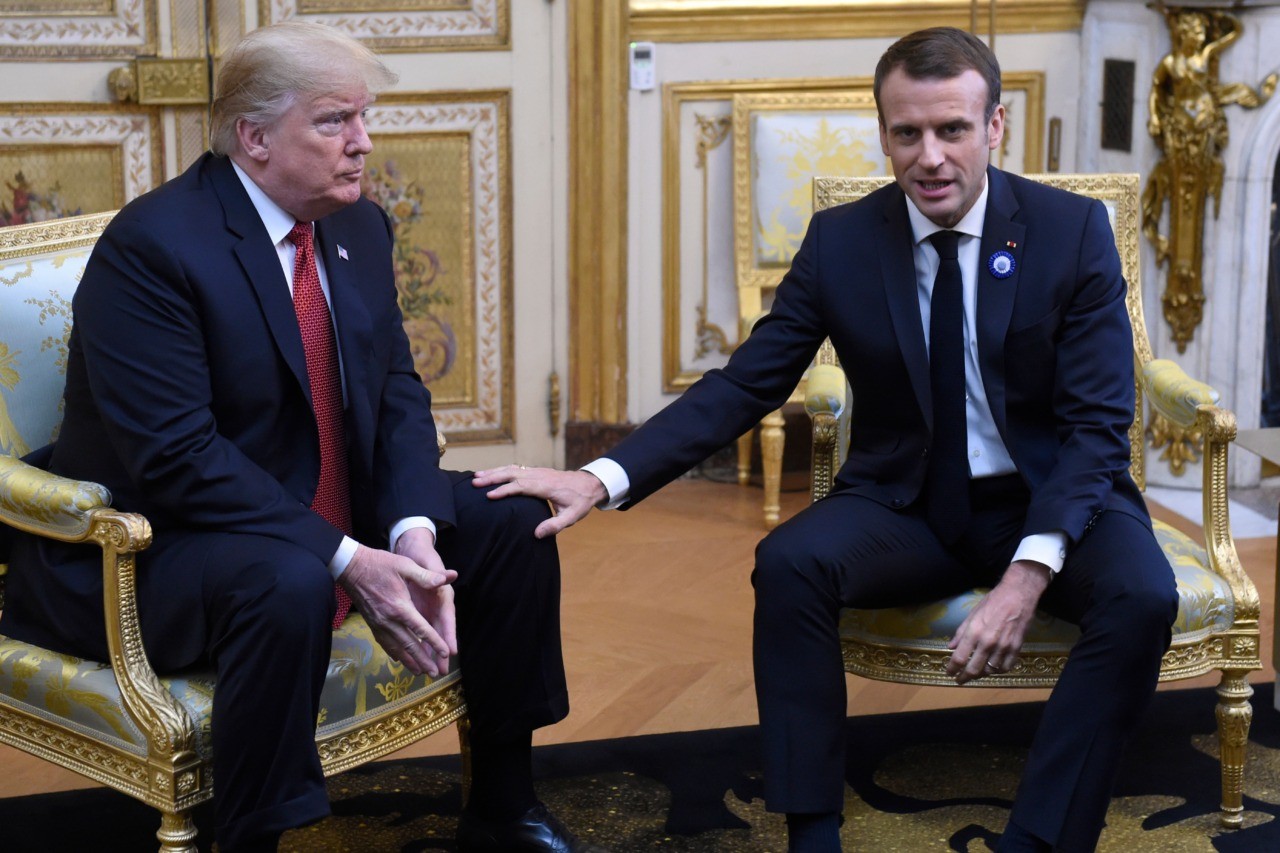 US President Donald Trump (L) speaks with French president Emmanuel Macron prior to their meeting at the Elysee Palace in Paris, on November 10, 2018, on the sidelines of commemorations marking the 100th anniversary of the 11 November 1918 armistice, ending World War I. (Photo by SAUL LOEB / AFP) (Photo credit should read SAUL LOEB/AFP/Getty Images)

Mr Tusk’s speech came after President Trump condemned French President Emmanuel Macron’s “very insulting” comments last week that the EU needs to build its own army to “protect” itself from “China, Russia and even the United States of America.”

Macron attempted to smooth over the cracks in the U.S.-France relationship over the weekend when President Trump came to Paris to mark the centenary of the Great War, resulting in some awkward body language as President Macron reached out to President Trump to pat his knee.

Later, Macron called nationalism “treason” and a “betrayal of all moral values,” with German Chancellor Angela Merkel alluding to a “blinkered” nationalism in Europe and elsewhere in the world creating analogous conditions to the political climate pre-World War One.