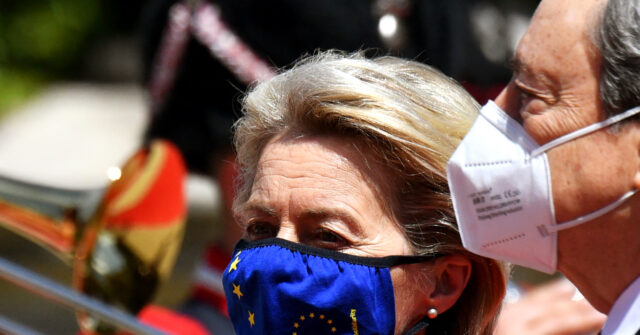 President Von der Leyen spoke on Thursday on a trip to the United States just days ahead of Italy’s national election on Sunday, saying: “My approach is that whatever democratic government is willing to work with us, we’re working together,” but added: “If things go in a difficult direction, I’ve spoken about Hungary and Poland, we have tools.”

League leader Matteo Salvini reacted with anger to the statement, saying the statement sounded like a threat: “These are disgusting words, the threatening tone is unacceptable,” he said, accusing the EU Commission chief of making an attempt to influence or even blackmail Italian voters, Il Giornale reports.

“Our parliamentary group will present a motion of censure. On Sunday, Italians vote, not the Brussels bureaucrats, if I were the President of the EU Commission I would worry about the [energy] bills,” Salvini added, going on to say such statements should lead to a resignation or an immediate apology.

In what appears to be the latest instance of European Union bigwigs attacking the conservative-led state, the European Parliament has now declared that Hungary is “no longer a democracy”.https://t.co/tDj6XwslfI

Antonio Tajani, formerly the President of the European Parliament and a member of Forza Italia, also slammed the remarks by Von der Leyen.

“It is not necessary to use this language,” he said. ” Italy is a democratic and free country, which believes in the values ​​of the European Union.”

Even political opponents of the centre-right coalition, such as former Prime Minister Matteo Renzi, expressed criticism over Von der Leyen’s words, with the Viva Italia leader warning: “I tell the President, you must not enter into Italian issues in the slightest.”

“We are for the United States of Europe. Precisely for this reason whoever Italy elects must that Europe respect the vote of the Italians. Even if the right wins, Europe must respect the electoral outcome,” Renzi added.

Polls show a steady lead for the right-wing alliance in the September 25 Italian elections, with Meloni’s conservatives promising aid to families to stem falling birthrates, and populist Salvini vowing action on immigration. https://t.co/uIruUf7XvR

The European Commission, however, defended Von der Leyen, with a spokesman claiming it was “absolutely clear that the president did not intervene in the Italian elections” despite senior figures on both the right and left in Italy clearly believing that she did.

“[W]hen she spoke about the tools available to intervene… [she] referred to procedures underway in other EU countries and therefore was highlighting the Commission’s role as guardian of the [European] treaties, particularly in the field of respect for the rule of law.”

Current polls predict Giorgia Meloni’s Brothers of Italy are likely to win the most votes of any single party on Sunday, while the centre-right coalition is projected to win as many as 60 per cent of parliamentary seats — which could make Meloni the first ever female prime minister in the country.

Meloni-Salvini Alliance Could Win 60 Per Cent Of Seats in National Electionhttps://t.co/bQq5ftoHEf