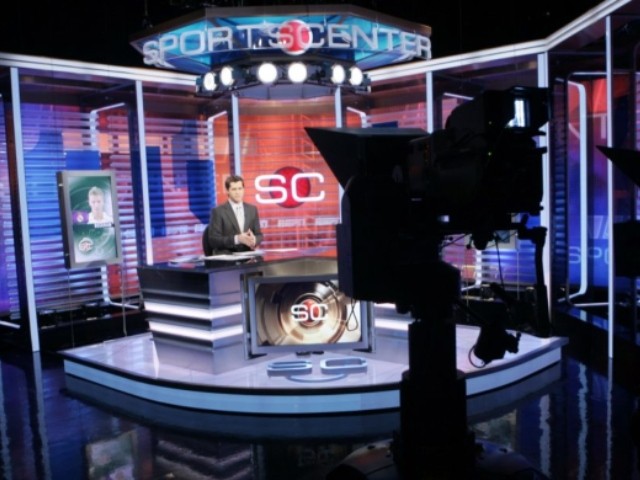 In a discussion of the ups and downs of ESPN’s flagship program, SportsCenter, network executive Norby Williamson reveals that a renewed focus on sports, instead of politics, has led to a resurgence in growth.

ESPN’s Norby Williamson has been tasked with following a company-wide mandate from Disney CEO Bob Iger and recently appointed ESPN President Jimmy Pitaro, to steer SportsCenter away from the left-wing abyss into which former hosts Hill and Michael Smith sent the show plummeting in 2017. Williamson is working to pull SportsCenter back to sports and away from politics.

But, after five years of ESPN executives insisting that the cable sports network had not drifted too far into leftist political waters, in a new interview published at the Hartford Courant, Williamson reveals that the political nature of SportsCenter did significant damage to the flagship show’s ratings.

“I think we miscalculated a little bit,” Williamson told the paper. “The perception became that you could just roll a talent out there and it doesn’t matter what he or she is saying — that the content didn’t matter. I just never believed that.”

Indeed, since Hill and Smith were deposed from their hosting duties, the 6 PM SportsCenter broadcast has enjoyed “eight straight months of growth,” the paper reported.

The first provable hint that Hill and Smith were destroying SportsCenter is that in the month following their removal, the show’s ratings skyrocketed. If nothing proved that SportsCenter had been mishandled under Hill and Smith, that should have been a big hint.

“I think we’ve recommitted to what people expect from us,” new host Sage Steele said a few months ago. “Just as I would have watched the ‘CBS Evening News’ show with Dan Rather, I want my information. This is the same thing – just sports.”

But with nearly of year of climbing numbers after Hill’s departure, Williamson notes, “I like where we’re at right now.”

Williamson also slammed those who think he is quashing the on-air talent’s freedom to opine.

“When people whine or complain, ‘It’s not the way it used to be – fragmentation, blah blah blah,’ it’s all crap,” Williamson said.

Williamson then made the most sensible comment a TV network executive can make. He noted that the customer’s needs are important: “You get information about your customers and adjust what you’re doing.”

Of course, Williamson is not the only executive to belatedly note that ESPN had drifted far afield from its actual job of covering sports. Both ESPN President Jimmy Pitaro and Disney CEO Bob Iger (Disney owns ESPN) have hinted that they now think the network drifted too far into politics.

“Jimmy felt that the pendulum may have swung a little bit too far away from the field,” Iger said back in September. “And I happen to believe he was right.

“And it’s something, by the way, that I think John Skipper had come to recognize as well. But Jimmy coming in fresh has had the ability to address it, I think, far more aggressively and effectively,” Iger added. “He has brought back some balance.”

While some few voices over the last five years were raised in alarm over the network’s drift leftward, the general attitude of leadership was to deny flatly that anything was going wrong. So, these recent comments are a reversal of that past policy of denial.

But it remains to be seen if ESPN can reverse its massive loss of customers. In October, for instance, the network lost another 2 million subscribers in fiscal 2018.