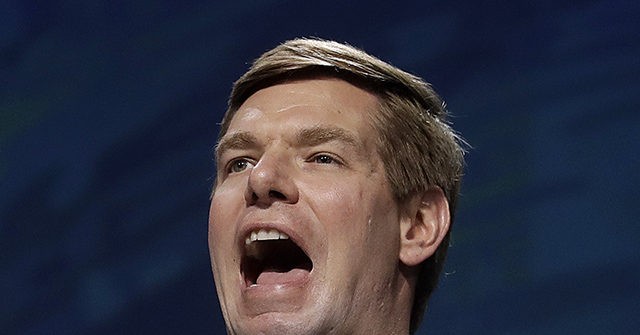 During a CNN town hall on Sunday, longshot 2020 White House hopeful Rep. Eric Swalwell (D-CA) said the network may have to move its headquarters out of Atlanta, Georgia, because of the state’s recently-passed anti-abortion legislation.

AUDIENCE MEMBER: Women’s reproductive rights are under attack in this country, as my home state of Georgia and other states around the country try to undermine Roe v. Wade. How will you ensure that a woman’s right to autonomy over her own body and access to care is not determined by the state in which she lives?

REP. ERIC SWALWELL: Well, first, my wife and I really deeply believe that it’s “Her body, her choice,” and that should be for every woman in America. Here’s what I’ll do as president. As president, I would only appoint justices who uphold the law, including the precedent that is Roe v. Wade. But I don’t want us to aim so low that we just protect what so many women generations ago marched and worked very hard to make sure it was there. I want us to repeal the Hyde Amendment that says that only a woman with private health care insurance can make that decision. But I also want to tell every young man in America today, “you have a duty and a responsibility right now to link arms with young women in America and make sure that we’re all in this to make sure a woman has a right to chose. It’s her decision. The government is never a part of that right.” That’s a responsibility that young men have to right now, so find young women march with them.

CNN HOST JIM SCIUTTO: On that topic, as folks here in Atlanta know very well, it’s now become an economic issue. You have companies, particularly film and television, a lot of films and television shows are shot in the Atlanta area. Netflix, Disney, Universal, WarnerMedia, which owns CNN. They’ve all warned they may halt business here if that law goes into effect. I wonder, do you support that kind of economic boycott?

REP. SWALWELL: Yeah, if that law goes into effect, I absolutely do, and CNN may have to move. There’s a lot of young women who work at CNN that will be affected.