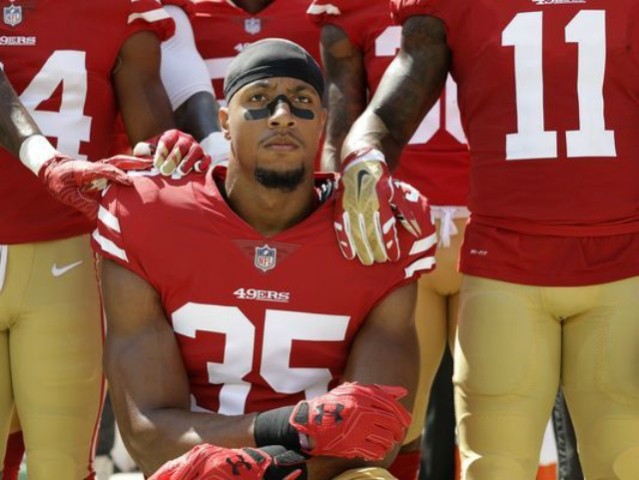 Former San Francisco 49ers player Eric Reid, says he is still thinking over different ways to protest other than taking a knee during the national anthem.

Still, after he turned free agent last year and sat for months without being signed, Reid claimed that he might not go back to taking a knee during the nation’s song. And according to the Hill, now that he is set to return to the game, he is “considering other ways” to protest.

“I said that I would be considering other ways (to protest). And I’m still considering,” Reid said during a press conference on Monday re-affirming his comments from March:

Eric Reid on if he plans to continue to protest during the national anthem. pic.twitter.com/ES7MCLq1PI

Reid noted in his Washington Post interview that the protests went awry and he felt that too many Americans felt the players were protesting the anthem itself and not just demonstrating against police brutality.

The newly minted Panthers safety also said that there were no extensive discussions about his protests before he was signed. But after he was under contract, he did talk to some Panthers players and executives about the protests. “I’ve talked to a couple people about it, and as I said, I’m still evaluating the scope of our country, and I’ll make that decision later,” he said.

Meanwhile, Reid’s grievance filed against the NFL claiming that the league “colluded” to keep him of the field is still going forward.