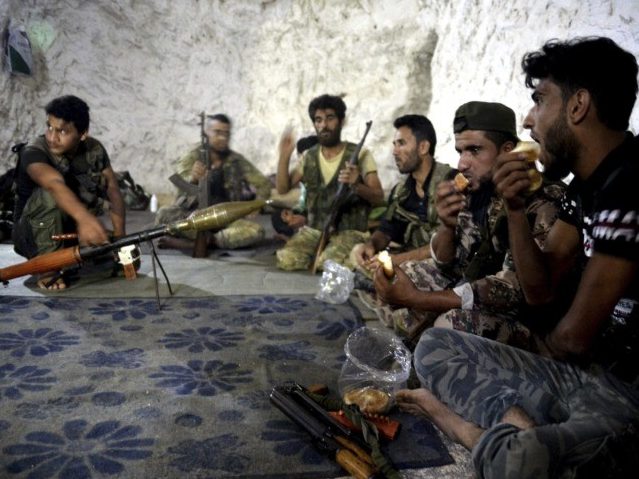 Free Syrian Army (FSA) rebels over the weekend said they would cooperate with Turkey’s efforts to avert clashes in Syria’s Idlib province between opposition forces and troops loyal to dictator Bashar al-Assad, but stressed that they would not surrender their weapons or territory.

The announcement by the Turkey-allied FSA rebels came on Saturday, a day before Turkish President Recep Tayyip Erdogan vowed to intensify Ankara’s involvement in Syria.

In a statement, the National Front for Liberation, which includes various FSA factions, reportedly declared, “Our complete cooperation with the Turkish ally in making their effort succeed in sparing civilians the calamities of war.”

“We remain cautious and alert to any treachery by the Russians, the regime and the Iranians, especially after the issuance of statements by them that indicate this agreement is temporary,” the statement added, according to Reuters. “Our finger will remain on the trigger, and we will not forgo our weapons or our land or our revolution.”

On September 17, pro-opposition Turkey and Assad’s ally Russia struck an agreement to establish a demilitarized zone in Idlib that would separate rebel fighters and Syrian regime forces.

Under the agreement, opposition forces must withdraw “heavy weapons, mortars, tanks, [and] rocket systems,” from the zone by October 10, Reuters noted, adding that “radical” insurgents, namely the Syrian al-Qaeda affiliate, are also expected to leave the zone by October 15.

Jihadis from al-Qaeda, which has established a stronghold in Idlib, have reportedly infiltrated the FSA.

Turkish and Russian forces are expected to patrol the demilitarized zone.

On Sunday, President Erdogan pledged to increase the number of safe zones in Syria, the state-controlled Anadolu Agency (AA) reported.

While addressing Turkish and Muslim communities during an event in New York organized by Turkish American National Steering Committee on Saturday, Erdogan reportedly said Turkey’s efforts in neighboring Syria would continue until it eradicates the terror threat facing his country.

Later in the day, in his address to the TURKEN Foundation, Erdogan claimed that the Turkish military cleared more than 1,540 square miles from the Islamic State (ISIS/ISIL) the U.S.-allied Kurdish forces as part of its efforts in Syria.

“We will take similar steps east of the Euphrates,” President Erdogan added, stressing that Ankara has turned the cleared areas into safe zones.

Turkey has pushed out the U.S.-backed Kurdish People’s Protection Units (YPG) from the so-called liberated areas.

Although U.S. NATO ally Turkey has long considered the YPG an affiliate of the terrorist Kurdistan Worker’s Party (PKK), the United States continues to work with the Kurdish fighters in their fight against ISIS.

On Sunday, Erdogan told the Russian newspaper Kommersant that the “moderate” Syrian opposition should be part of a political solution in Idlib.

Turkey considers FSA rebels to be “moderate.” Erdogan indicated that Turkey would defend the so-called “moderate” rebels against any attempt to designate them as “terrorists.”