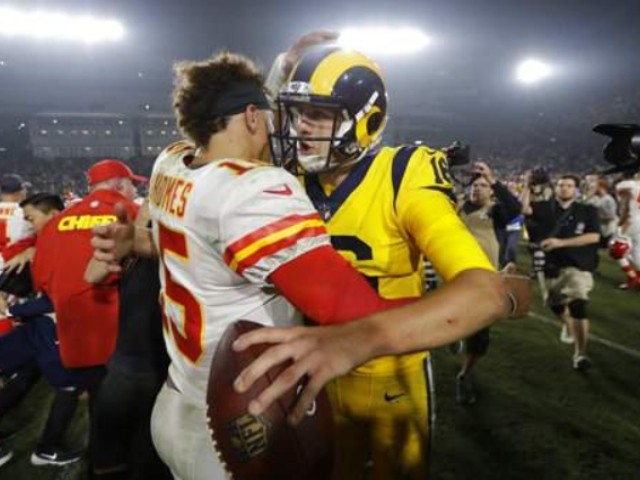 The last couple of years haven’t been the best for the NFL, with attendance and TV ratings dipping, in part due to some players protesting during the anthem.

But if they could bottle what happened Monday night at the Los Angeles Coliseum, perhaps it can help them get back to previous heights.

Not only was the Los Angeles Rams’ 54-51 victory over the Kansas City Chiefs one of the most exciting NFL regular season games with great TV ratings, but the stadium was filled with first-responders and military veterans given free tickets.

The game, which featured two of the NFL’s hot young quarterbacks, the Rams’ Jared Goff (son of a fireman) and the Chief’s Patrick Mahomes, included 1,001 total yards, 56 first downs and 10 passing touchdowns. And the game didn’t lose its audience in an action-packed fourth quarter which featured four lead changes and 35 points combined.

On Salute to Service Night, the Rams paid tribute to men and women with a family or military connection to the state of California, who died while serving in the armed forces, or who died from injuries sustained while serving in the post 9/11 era. Each player wore the initials of a Fallen Hero on their helmets and the families of the fallen were recognized during the game.

Players and coaches, from both the Rams and Chiefs, wore hats honoring a variety of Los Angeles-area fire and law enforcement agencies.

The Rams’ organization gave up thousands of tickets to first-responders and people affected by the California wild fires and the recent shooting at a Thousand Oaks bar which killed 12.

This game was originally scheduled to be played in Mexico City, but was moved to Los Angeles due to poor field conditions at Estadio Azteca.

The Rams distributed free tickets to the following agencies:

So it was a special night in Los Angeles, with the game an instant classic, and appreciation for the military and first-responders.

And surely the NFL hopes this evening buttresses their product moving forward. Some NFL teams were hurt at box office by the Colin Kaepernick-led anthem protest movement, started in the summer of 2016, to fight racial injustice and police brutality. The anthem protests clearly turned off some NFL fans, not only costing the league in attendance, but also in TV ratings.

The protest movement has calmed down a great deal in 2018, with a scant few players left protesting and not garnering much attention.

So perhaps last night was a turning point for the NFL with a game for the ages, great TV ratings, and much love shown to the military and first-responders.