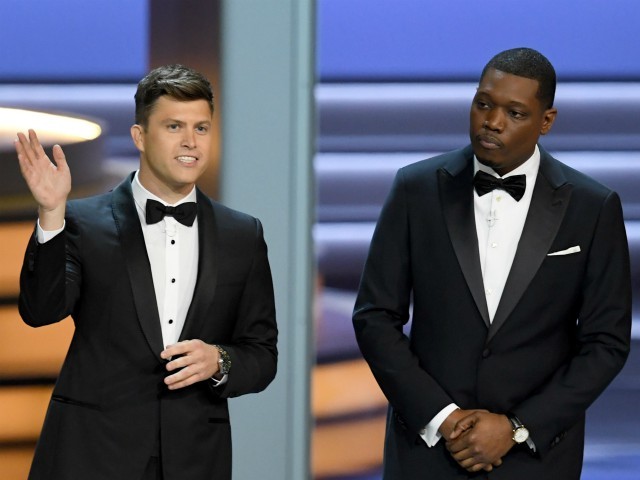 During the opening monologue of the 70ths Emmy Awards, hosts Michael Che and Colin Jost of SNL fame went after Roseanne Barr and made predictable jokes about Nazis.

“I don’t know if you know this. The first Emmys were held back in 1949. Things were very different back then–gas was 17 cents a gallon, a new home cost $7,000, and we all agreed that Nazis were bad,” Colin Jost said.

The two hosts also went after Roseanne Barr, who was let go from ABC after sending a racist tweet.

‘Roseanne was cancelled by herself, but picked up by white nationalists,” Jost joked.

“I heard Roseanne is actually moving to Israel. I mean, damn,” Che continued. “How messed up is your life when you have to go to the Middle East just to get peace of mind?”

The hosts also poked fun at the Hulu show The Handmaid’s Tale.

Michael Che joked, “I don’t know if you’ve seen it, The Handmaid’s Tale takes place in an imaginary future where an entire group of people are violently forced to work and make babies against their will. It’s what black people call ‘history.’ It’s Roots for white women, that’s what it is.”

The award show actually did poke some fun at themselves, however. A humorous song led by Keenan Thompson and Kate McKinnon made light of Hollywood’s past issues with sexual abuse in the industry and a supposed lack of diversity.