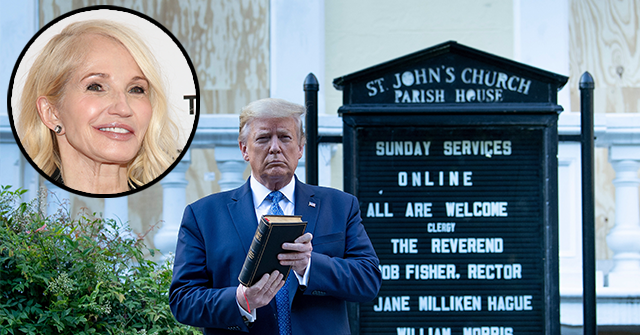 Actress Ellen Barkin joined the throng of leftists in criticizing President Donald Trump’s Monday visit to St. John’s Episcopal Church, saying Trump “would have gone down in flames” after approaching the church “if Jesus was our Savior.”

“If Jesus was our savior trump would have gone down in flames before he crossed the street,” the Ocean’s Thirteen actress said.

If Jesus was our savior trump would have gone down in flames before he crossed the street https://t.co/uXv6LKQLz2

“And now I’m going to pay my respects to a very, very special place,” Trump concluded, making his way to the church on foot and holding up a Bible upon arrival.

Trump received a slew of backlash after authorities cleared the area around Lafayette Park prior to his arrival to the historic church, which was damaged during Sunday’s violent protests. Several Trump critics stated that “fascist” Trump had protesters “tear-gassed” for a “photo op,” but a statement from the U.S. Park Police (USPP) calls those claims into question.

USPP stated that “violent protestors on H Street NW began throwing projectiles including bricks, frozen water bottles and caustic liquids” at 6:33 p.m. and added that they “also climbed onto a historic building at the north end of Lafayette Park that was destroyed by arson days prior. ”

USPP also explained that intelligence “had revealed calls for violence against the police, and officers found caches of glass bottles, baseball bats and metal poles hidden along the street.” All of those factors prompted action — action which did not involve the use of tear gas:

To curtail the violence that was underway, the USPP, following established policy, issued three warnings over a loudspeaker to alert demonstrators on H Street to evacuate the area. Horse mounted patrol, Civil Disturbance Units and additional personnel were used to clear the area. As many of the protestors became more combative, continued to throw projectiles, and attempted to grab officers’ weapons, officers then employed the use of smoke canisters and pepper balls. No tear gas was used by USPP officers or other assisting law enforcement partners to close the area at Lafayette Park. Subsequently, the fence was installed.

“The USPP will always support peaceful assembly but cannot tolerate violence to citizens or officers or damage to our nation’s resources that we are entrusted to protect,” the statement concluded.

Barkin is not the only outspoken progressive to invoke fiery imagery in describing Trump’s visit.

“He holds that Bible like it’s burning him,” Rep. Alexandria Ocasio-Cortez (D-NY) remarked.