“We made a bad joke. Our passion for voter registration clouded our judgement and we are sincerely sorry,” Elle’s official Twitter account wrote Thursday.

We made a bad joke. Our passion for voter registration clouded our judgement and we are sincerely sorry. https://t.co/cYGGrpfBCz

This apology comes after Elle sent a tweet that spread fake news about Kanye West and Kim Kardashian West in an attempt to direct people to a voter registration site.

“Kim Kardashian and Kanye West are splitting up,” the tweet read, directing readers to a link to a site for the group “When We All Vote.” 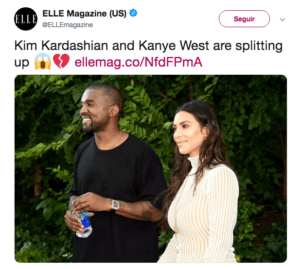 “So far in the primaries, women have beat long-time incumbents and created historic races, all while redefining what it looks like to be a woman in politics,” the site reads in part. “And now you have the opportunity to vote for them, or whomever you choose, in the midterm elections. No matter your party or your state, it’s more essential than ever to make your voice heard. Take a few minutes to complete the form below, and be sure to cast your vote on Nov. 6.”

“When We All Vote” is no ordinary voter registration drive–it is an effort launched in part by former First Lady Michelle Obama.

Michelle Obama teamed up with Lin-Manuel Miranda and Tom Hanks to launch the group this summer.

In a video for “When We All Vote” made with BET in September, Obama specifically promoted voting for “women of color.”

“Women of color know how to get things done for our families, our communities, and our country. When we use our voices, people listen. When we lead, people follow, and when we do it together, there’s just no telling what we can accomplish ” she said.

.@MichelleObama has a special message from #BlackGirlsRock for women of color: Help your sisters, children, and congregations get registered and ready to vote! Do so with @WhenWeAllVote at https://t.co/N9OSYcz6xy. #WhenWeAllVote #BETImpact pic.twitter.com/X7bSxVp8uO