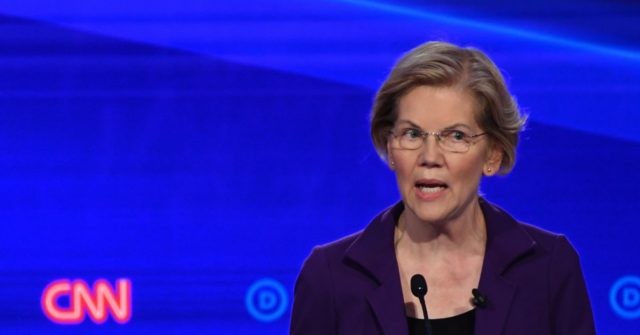 Sen. Elizabeth Warren (D-MA) would not deny Tuesday that her plan for “Medicare for All” raised taxes on the middle class — even as she did everything she could to avoid confirming it.

A CNN panel in the spin room after the fourth Democrat debate on Tuesday night in Columbus, Ohio, struggled to pin Warren down on the question of whether her policy would raise middle class taxes.

Sen. Bernie Sanders (I-VT), the author of the bill Warren backs, has admitted openly that middle class Americans would pay higher taxes under his (and her) plan, but argues that middle class families would save money overall because their health insurance costs would supposedly fall.

But Warren has dodged the question in debate after debate, and interview after interview — and did so again when confronted by her opponents in the debate.

In the spin room after the debate, CNN’s anchors and political pundits struggled to extract an answer from Warren. Jake Tapper tried to help her craft an answer that would admit the tax hike, but argue for lower overall costs; John King pointed out, sympathetically, that Warren ran the risk of being accused of lying to the public.

Warren replied, over and over again: “My commitment is I will not sign a bill into law that raises costs on middle class families.”

David Axelrod, former White House adviser to President Barack Obama during the Obamacare fight, was incredulous at Warren’s claim that she knew with certainty that “Medicare for All” would not result in higher overall costs for any middle class family. “How can you even make an assurance as to how all this is going to pencil out?”

Warren stuck to her talking point, refusing to admit she would raise taxes — but declining to deny she would, either.