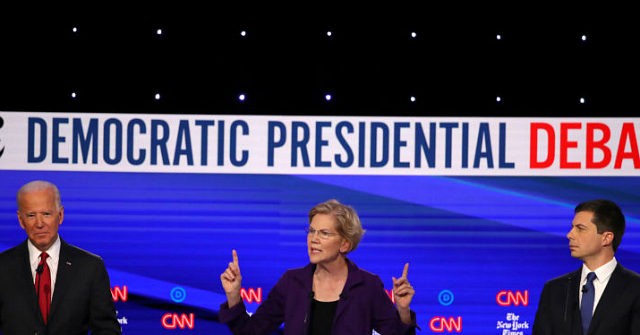 Sen. Elizabeth Warren (D-MA) subtly reminisced her days as a registered Republican. She answered a question about a “surprise” friendship that impacted her and her beliefs by talking about her relationship with “deeply principled Republican” Charles Fried — who served as Solicitor General from 1985-1989 — and her three brothers, two of whom are Republicans.

Candidates at the Ohio Democrat debate on Tuesday were asked, “What friendship have you had that would surprise us, and what impact has it had on you and your beliefs?”

“Twenty-seven years ago, when I was under consideration for a job,” Warren began, mentioning Fried, whom she described as “a deeply principled Republican.”

“We didn’t agree on much. I was far more liberal than he was,” Warren said.

Notably, Warren was a registered Republican 27 years ago. She did not change her party affiliation to Democrat until 1996.

“But he also was willing to listen to my work about what’s happening to America’s middle class, and Charles engaged with it over and over and ultimately is the person who made sure that I got the job,” Warren continued before pivoting to her Republican brothers.

“You know, I grew up out in Oklahoma. I have three older brothers. They all served in the military. Two of the three are still Republicans. I love all three of my brothers. And there are a lot of things that we’re divided on, but there are core things that we believe in together,” the presidential hopeful said.

We want to see all of our children get a good start in life. We don’t want to see any of our friends or neighbors not get covered by health care. We’re willing to get out there for the things we believe in. Look, people across this country — whether they’re Democrats, independents, or Republicans — they know what’s broken. They know that we have an America that’s working better and better and better for a thinner and thinner and thinner slice at the top and leaving everyone else behind. People across this country, regardless of party, are ready to say, “No more. We want an America that works for everyone.”

“2020 is our moment in history. It’s a deep honor to be here to be in this fight. I know what’s broken. I know how to fix it, and we are building a grassroots movement to get it done that includes everyone,” she concluded.