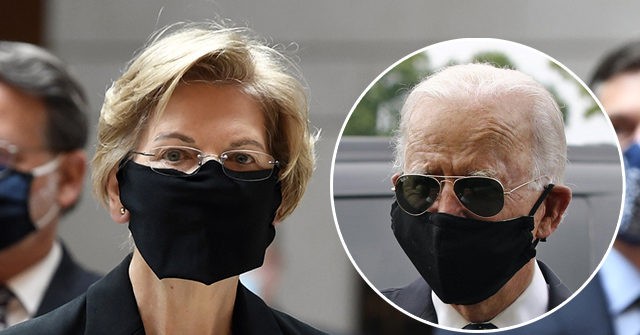 “Thank you for asking your friends to help me out,” Biden told Warren during the event. “It’s the biggest fundraiser we’ve ever had. And it’s all because of you.”

Warren’s participation in the event is notable, given her past skepticism of Biden — once suggesting that nominating the former vice president would serve as a “big risk” to the Democrat Party — and her past condemnation of high-dollar fundraising events, infamously criticizing former Mayor Pete Buttigieg (D) for courting big donors.

“So the mayor just recently had a fundraiser that was held in a wine cave full of crystals and served $900-a-bottle wine,” Warren, who touted her campaign as 100 percent grassroots-funded, said during one of last year’s primary debates. “Think about who comes to that.”

However, Warren’s rejection of high-dollar fundraisers seemed to be a new position isolated to her presidential campaign, as she gladly participated in similarly swanky events in the past. In 2018, for example, Warren held a winery fundraiser, offering perks for big donors such as a souvenir wine bottle and the promise of  “VIP experiences” for those who donated $2,700.

As Breitbart News detailed, Warren has also received support from “at least 30 billionaires over the course of her political career and has accepted the assistance of super PACs, one of which tried to save her floundering campaign.”

“You know, I think it’s a little premature to be talking about vice presidential. We’re still in primary here, and I’m working hard on this,” she said in October.

Just months ago, Warren remained skeptical of the flurry of endorsements received by Biden and dismissed him as a “Washington insider” who “will not meet this moment.”

“Nominating a man who says we do not need any fundamental change in this country will not meet this moment,” she continued.

“Nominating someone who wants to restore the world before Donald Trump, when the status quo has been leaving more and more people behind for decades, is a big risk for our party and our country,” she added.