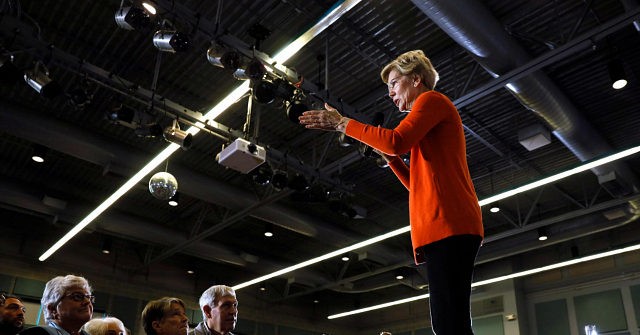 Sen. Elizabeth Warren (D-MA) on Thursday floated two potential individuals she would consider including in her administration, both of whom would violate her pledge to stand against lobbyists and giant firms.

During an interview with CNN political commentator Angela Rye in Greensboro, North Carolina, Warren named two individuals she would consider including in her administration: Former Massachusetts Gov. Deval Patrick (D) and “someone like” Melody Barnes:

However, giving either of the individuals a position in her administration would call her hardline stance on standing up to both lobbyists and big firms into question.

Patrick, for example, joined Bain Capital in 2015 and serves as a “Managing Director and Co-Managing Partner of the Double Impact business,” according to his bio on the Bain Capital website.

Patrick defended his role in an interview with CNN’s Jake Tapper last year.

“I’m having a terrific time in this fund that we launched,” Patrick stated. “It’s a fund that invests in companies in order to drive social and environmental impact, and it’s part of this impact investing industry or trend.”

“One of my partners describes … impact investing as the laboratory where capitalists work to reform capitalism,” he added:

Meanwhile, Barnes has an extensive history of lobbying, doing so in 2003 and 2004 “for liberal advocacy groups, including the American Civil Liberties Union, the Leadership Conference on Civil Rights, the American Constitution Society and the Center for Reproductive Rights,” as Politico and other outlets reported:

Worth noting that the two people @ewarren floated as potential cabinet members today have worked in industries she regularly slams on the trail as “corrupt.” @DevalPatrick is a managing director an Bane Capital and @MelodyCBarnes lobbied in 2003-04 for liberal advocacy groups https://t.co/GPKUlbCfk1

This stands in stark contrast with the hardline positions Warren outlines in her sweeping anti-corruption plan, which devotes a significant portion to lobbyist activities and what the presidential hopeful calls the “revolving door between government and giant, dominant firms.”

“We’ve seen the issue of industry lobbyists and top execs spinning freely through the revolving door to and from important government positions in both Democratic and Republican administrations,” Warren wrote.

But giant corporations should compete on a level playing field – and they shouldn’t be able to rig the system by scooping up every available former government official in an effort to get federal regulators off their backs. That’s why I have put forward proposals to get big money out of politics and to end lobbying as we know it – and it’s why I’m going further to slam shut the revolving door between government and giant, dominant firms.

This would not be the first time Warren has faced a contradiction in her rhetoric and actions. Her campaign is funded, in part, by $10.4 million from her senatorial campaign. At the time, she happily courted big donors and received at least $95,000 from “various lobbyists,” as CNBC reported.

In May, Warren threw support behind Sen. Lindsey Graham’s (R-SC) Democrat challenger Jaime Harrison, a former corporate lobbyist who worked for the Podesta Group from 2008-2016:

Jaime Harrison will fight hard for the people of South Carolina and take our country forward. Go Jaime! https://t.co/pY5keteN1i

In September, Warren tapped former Planned Parenthood leader Kimberly Diaz Scott, who registered as a lobbyist, to head up her presidential campaign in Florida.