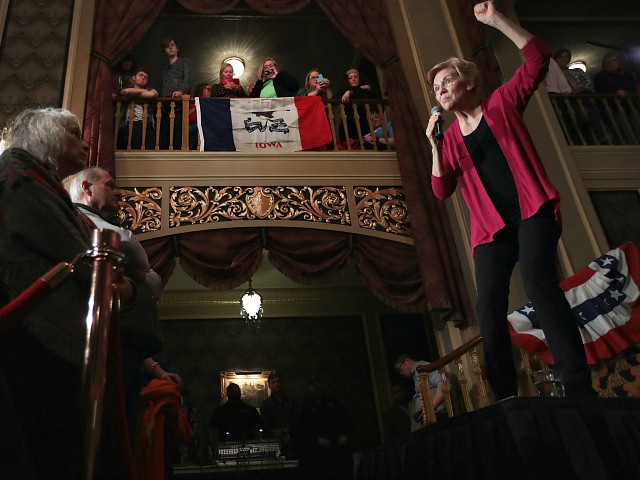 Elizabeth Warren stopped in five Iowa cities between Friday night and Sunday and was met by generally respectful audiences who were happy to listen to her pitch. The bottom line, however, appears to be that, most likely, Democrat caucus goers are reserving judgment until they hear from the rest of the field and have more opportunities to ask Warren additional questions.

It is just the opening round in what is expected to be a grueling race for the Democratic presidential nomination, which may see as many as 20 candidates vying for the party’s nod to take on President Donald Trump, the expected Republican nominee, in the November 2020 general election.

Iowa will hold the first-in-the-nation electoral contest among presidential contenders from both parties in February 2020 when the statewide caucuses are held. A good showing in Iowa — not necessarily requiring a first-place finish — is considered an important first step in securing the necessary delegates to win the presidential nomination in both the Republican and Democratic parties.

In 2016, Sen. Ted Cruz (R-TX) won the first round of the Iowa primaries, with Donald Trump finishing a close second. Trump followed up that second-place Iowa finish with a win ten days later in New Hampshire’s first-in-the-nation primary and was well on his way to securing the Republican presidential nomination.

A CNN/Des Moines Register/Mediacom Iowa Poll of 455 likely Iowa Democratic caucus-goers conducted between December 10 and December 13 placed Warren in a distant fourth place among those who expressed a first choice at eight percent. Former Vice President Joe Biden was in first place with 32 percent, followed by Sen. Sanders with 19 percent and former Rep. Beto O’Rourke in third place with 13 percent. The poll has a margin of error of 4.6 percent.

Warren announced the formation of a presidential exploratory committee on New Year’s Eve, December 31. None of the other potential candidates for the Democratic presidential nomination have yet announced whether they will run, though Biden is expected to make an announcement on the topic in the next two weeks, according to press reports.

At her first stop in Council Bluffs, Iowa, on Friday, as the Des Moines Register reported, her “microphone cut off about ten minutes into her first speech” at McCoy’s Thunderbowl, a bumpy start for the initial event of her 2020 presidential campaign.

The Warren campaign attempted to portray the crowd at the event as very large, tweeting a four-second video — sped up and continually looped to create the impression of a very large crowd — that said it was the “First event in Iowa, first overflow line in Iowa!”

Numerous commenters on Twitter noted that when the video is slowed down to normal speed, the number of people waiting in line does not look particularly large.

As Breitbart News reported, the capacity of the McCoy’s Thunderbowl event center is 150.

The Boston Herald reported on the reaction of some of the members of the Council Bluffs audience:

Many who came to see Warren four years ago supported Vermont Sen. Bernie Sanders, a like-minded independent, for the Democratic nomination. Some said they were ready to move on, even if he enters the race. Though many voters here are checking out Warren, they are also mentioning other potential candidates, including former Vice President Joe Biden, former Rep. Beto O’Rourke of Texas, Minnesota Sen. Amy Klobuchar, New Jersey Sen. Cory Booker and Sen. Kamala Harris of California.

In Sioux City on Saturday, Warren attempted to defuse the controversy surrounding her false claims of Native American ancestry and delivered a carefully scripted response to a friendly question from the audience about why she had taken a DNA test and released the results in October showing she had between 0.1 percent and 1.6 percent DNA in common with people from Peru, Colombia, and Mexico.

“My question to you: Why did you undergo the DNA testing and give Donald Trump more fodder to be a bully?” a woman in the audience asked Warren.

“Yeah, well, you know, I’m glad you asked that question. I genuinely am, and I’m glad for us to have a chance to talk about it,” Warren began in her response.

Though she now says she is “not a person of color,” Warren did nothing in 1993 when she was a visiting professor at Harvard Law School to correct an article published by the Harvard Women’s Law Journal that included her name as one approximately 250 “Women of Color” on law school faculties, as Breitbart News reported … Warren had several subsequent opportunities in the 1990s to correct the record and clarify that she is “not a person of color,” but took no action then either.

The results of her visit to five cities between Friday and Sunday may also have taken a physical toll on the 69-year-old senator from Massachusetts.

By the time she reached Des Moines in Iowa, her voice was raspy and she told the audience she had developed a cold.

Her explanation displayed the awkwardness that typified much of her interaction with potential Democratic caucus attendees interested in hearing what she had to say, as CNN’s DJ Judd reported in a tweet.

“So first piece of bad news is I’ve picked up a cold. Too much time with little people, so I will try my best to croak,” Warren told the crowd.

Addressing overflow supporters in Des Moines, Elizabeth Warren says, “So first piece of bad news is I’ve picked up a cold. Too much time with little people, so I will try my best to croak through this.”

“A spokesperson for Warren said the senator was referring to her grandchildren with whom she had spent the holidays,” the Washington Examiner reported.

The Warren campaign tweeted out a two-minute, 20-second video of the crowd line in Des Moines on Saturday, which was significantly longer than the Council Bluffs line of Friday.

The Washington Examiner reported 700 people were in the Des Moines crowd.