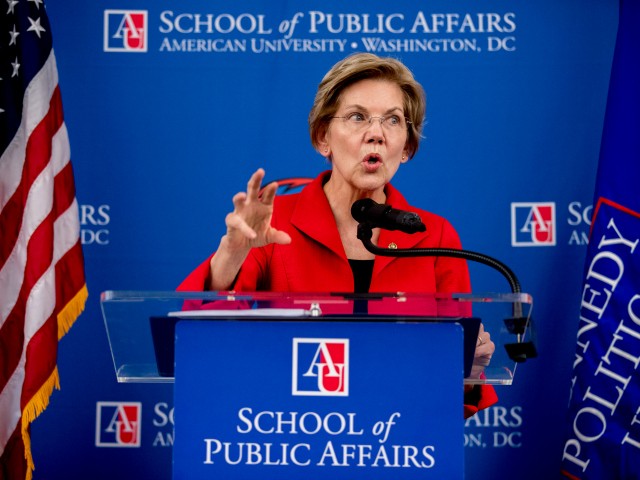 Sen. Elizabeth Warren (D-MA) spoke at American University Washington College of Law in a speech billed as foreign policy-focused; however, it included criticism of President Donald Trump and his policies and claimed he promotes white nationalism and encourages “domestic right-wing terrorism.”

“He cozies up to white nationalists,” Warren said on Thursday. “He undermines the free press and incites violence against journalists.”

“The 2016 election provided a stark reminder that we must remain vigilant and fight for our democracy every single day,” Warren said. “That starts with protecting our elections and democratic processes, and making it clear that there will be severe consequences for those – foreign or domestic – who meddle, hack, or undermine them.”

“It means ensuring a meaningful opportunity for every American citizen to vote,” Warren said. “And it means fighting for equal justice and protection under the law for all.”

“It also requires us to speak out against hateful rhetoric that fuels domestic terrorism of all kinds, whether in San Bernadino or Charleston, Orlando or Charlottesville, Fort Hood or Pittsburgh,” Warren said. “We must speak plainly about all of these incidents.”

“Just like the hateful terrorism of Al Qaeda and ISIS, domestic right-wing terrorism is completely incompatible with our American values,” Warren said.

As for her stance on foreign policy in the speech, Warren opposes every aspect of Trump’s approach, saying he “embraces dictators of all stripes,” and she painted a grim picture of the state of global affairs under this president.

“Let’s start with a serious problem: Around the world, democracy is under assault,” Warren said. “Authoritarian governments are gaining power.”

“Right-wing demagogues are gaining strength,” Warren added. “Movements toward openness and pluralism have stalled and begun to reverse.”

Warren did not mention any of the president’s successes: halting North Korea’s development of nuclear weapons, debilitating ISIS, confronting Iran for funding terrorism around the globe, and unjustly gaining the release of Americans held abroad unjustly.

Instead, she called for cutting a “bloated defense budget” and the halt of “reckless, endless wars in the Middle East.”

Warren’s speech included leftist talking points — from corporations’ alleged mistreatment of American workers and unions to the dangers of “cutthroat capitalism” and the pitfalls of free trade.

She also said she would oppose Trump’s renegotiated NAFTA trade agreement with Mexico and Canada while admitting it needed to be revisited and revised.

She also claims the agreement favors “big drug companies” and does not address climate change.

“For these reasons, I oppose NAFTA 2.0 and will vote against it in the Senate unless President Trump reopens the agreement and produces a better deal for America’s working families,” Warren said.