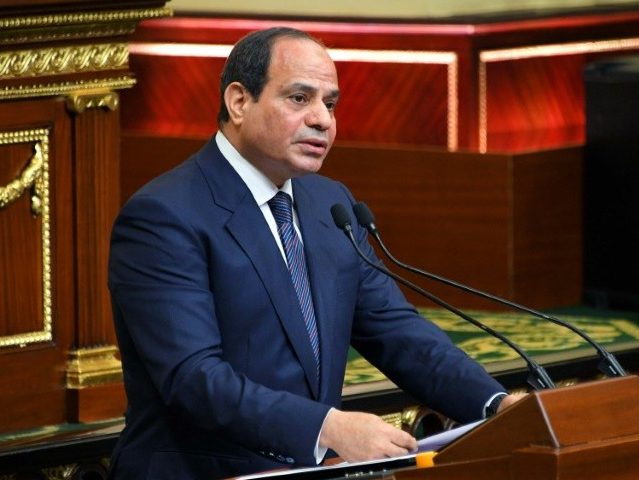 Egyptian President Abdel Fattah Al-Sisi, during his address before the United Nations General Assembly on Tuesday, condemned the international body for lacking credibility and being ineffective in the Arab region and Africa, citing the ongoing conflicts in Libya, Syria, and Yemen.

The Egyptian leader noted that the U.N. has failed to prevent the ongoing “disintegration” of the nation-state in the Arab region, which he said poses a significant threat against world order.

Referring to the U.N., Sisi declared:

We have to admit that there is a flaw in the international system, which negatively affects it’s performance, and casts a shadow over its credibility in the eyes of many peoples, particularly in the Arab and African regions, wherein Egypt lies. For how can we blame an Arab who questions the credibility of the United Nations and the values it proclaims, at a time when his region is threatened by the disintegration and collapse of the nation state, to give way to a wave of terrorism and sectarian conflicts that deplete the capacities of the Arab peoples?

Can we consider an overstatement an African’s complaint regarding the ineffectiveness of the world order, when his continent suffers from an economic order that perpetuates poverty and inequality, reproduces social and political crises and provides no prospects for progress and development?

Egypt’s President said that to restore its credibility and effectiveness, the U.N. must renew its commitment to preserving the nation-state, the peaceful settlement of disputes, and addressing problems in the global economic system and access to resources.

Sisi acknowledged that the Arab region is susceptible to conflict, telling the general assembly:

The Arab region is one of the most vulnerable to the dangers of nation-state disintegration and the ensuing creation of a fertile environment for terrorism and exacerbation of sectarian conflicts. Thus, preserving and reforming the foundations of the state is a fundamental priority of Egypt’s foreign policy in the Arab region. There can be no way out of the crisis in Syria and the plight of Yemen, except by restoring the nation-state, preserving its sovereignty snd state institutions, as well as realizing the legitimate aspirations of its people.

The Egyptian president accused the U.N. of neglecting the wars in Yemen, Syria, and Libya.

“If we are to halt the loss of life, the depletion of Libya’s resources, and move towards the reconstruction phase, then there is no room for partial solutions neither in Libya nor in Syria or Yemen; crises of such magnitude require comprehensive and not partial solutions,” he said.

The Trump administration has reportedly cut U.S. taxpayer funding for some U.N. agencies, noting that the international body is “bloated and ineffective,” the Los Angeles Times reported on Sunday.

Trump met his Egyptian counterpart while both were in New York to attend the U.N. General Assembly. The U.S. president reportedly praised Sisi for his efforts against terrorism.