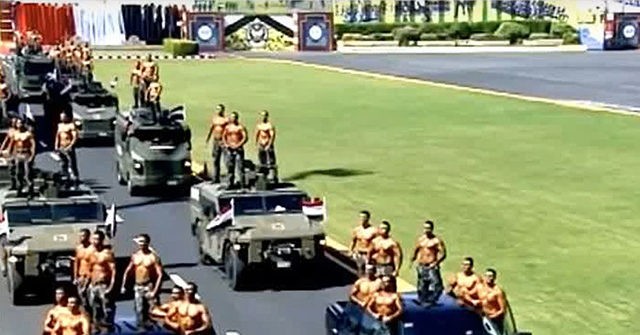 Egyptian police academy cadets stripped off their shirts and posed topless during a graduation ceremony last week outside of Cairo; video of the ceremony began circulating this week.

Egyptian President Abdel Fattah Al-Sisi attended the ceremony along with 1,500 cadets, a select number of whom were chosen to put their bare chests on display as part of an elaborate, action-themed parade.

The spectacle saw star cadets “pulling off stunts with rings of fire as well as breaking concrete blocks at the premises of the [police] academy in New Cairo,” the Middle East Monitor reported on Monday.

Bare-chested cadets stood proud, flexing their muscles atop makeshift floats — including tanks, boats, and a custom-built, multi-tiered platform — as the Egyptian head of state looked on.

At one point during the ceremony, the topless cadets were seen kneeling as they passed Sisi, a former Egyptian army general, along the parade route. The graduation was broadcast on Egyptian state TV and also included a swearing-in of the new officers. The graduates took an oath before Sisi to uphold Egypt’s law and constitution, and to protect the Egyptian homeland and people, according to the Arabic news website Al Ahram.

“During the ceremony, El-Sisi bestowed the second class medal of excellence on the top graduates and granted Arab and African students the same medal,” according to the report. The president congratulated the new officers and addressed their families, saying “they prepared their sons and devoted them to the country to defend us [Egyptians].”

The ceremony was also attended by Egypt’s Interior Minister, Mahmoud Tawfik, who “saluted the president for his attendance and expressed his appreciation for the fresh graduates.” In his remarks, Tawfik stressed that Egypt will show “no tolerance towards anyone who tries to undermine the security and safety of the homeland.”

In addition to demonstrating feats of strength during the parade, “[c]adets also gave a presentation on special skills for combating terrorism, breaking into terrorist and criminal hideouts, and detecting explosive devices,” according to Al Ahram.

New Cairo Police Academy Chief Major General Ahmed Ibrahim also spoke at the graduation, revealing that the academy “has prepared a cultural program for its cadets to be aware of the challenges besetting the country.” The police chief hailed “efforts exerted by the [Egyptian] interior ministry to upgrade the academy’s performance on different fronts.”