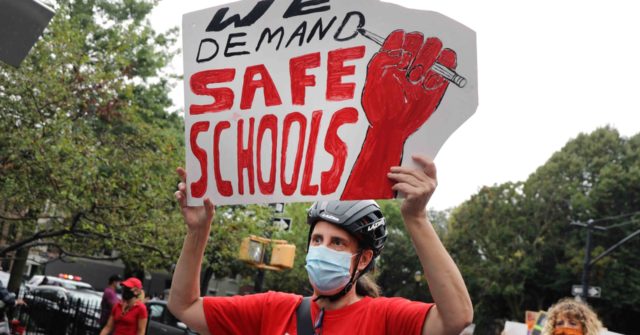 New studies suggest that politics, not science, is driving local policies on school closures and re-openings.

According to the non-partisan education news website The 74, the two factors most closely correlated with school re-openings are the share of the local vote that went to President Donald Trump in 2016, and the degree to which teachers belong to unions.

In an article titled “Politics, Not Science, is Driving School Reopening Decisions to a ‘Really Dangerous’ Degree, Research Suggests,” The 74 reports:

The latest evidence, released this month as a working paper through Brown University’s Annenberg Institute for School Reform, indicates that partisanship — as exhibited by the share of voters in a given county who supported Donald Trump in 2016, as well as the strength of local teachers’ unions — drove reopening plans “far more” than public health conditions.

That conclusion echoes the work of Jon Valant, a senior fellow at the Brookings Institution’s Brown Center on Education Policy, who shared his own findings in a much-discussed blog post this summer. Tracking the reopening plans of over 250 districts, Valant detected “no relationship” between each locality’s decision and its per-capita COVID cases.

Hartney and Finger also highlighted a connection between reopening decisions and organized labor, according to two metrics: the size of a district (prior research has shown that higher student enrollments are correlated with greater union strength) and whether it permitted collective bargaining. Schools planned for a remote opening in 40 percent of districts where teachers could bargain collectively, the authors found, compared with just 15 percent of districts in which they could not.

Other research supports the idea that union concentration is associated with a greater likelihood of online instruction. One recent study conducted by Corey DeAngelis, a prominent union critic and director of school choice at the libertarian Reason Foundation, found evidence that school reopening decisions were correlated with four different measures of union strength — but not with COVID risk. In states with right-to-work laws, the paper found, schools were 14 percentage points more likely to reopen in person relative to states without such laws.