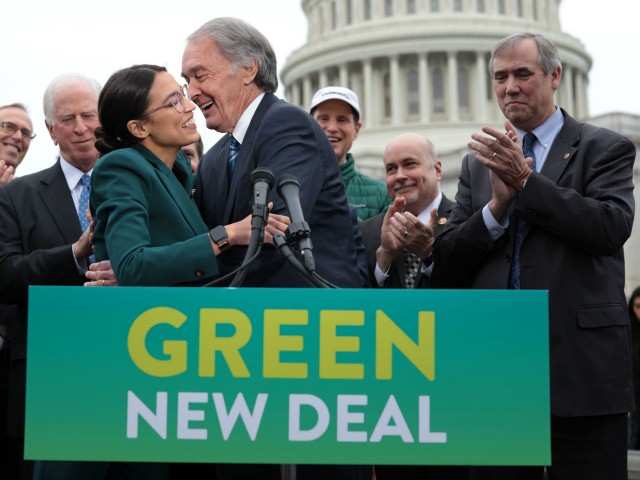 Sen. Ed Markey (D-MA), a longtime climate change zealot and cosponsor with Rep. Alexandria Ocasio-Cortez (D-NY) of the Green New Deal resolution unveiled on Thursday, tweeted his enthusiasm for a plan that he called “the new climate democracy.”

We are reclaiming our leadership of the most important issue facing humankind. This is the new climate democracy – of the people, by the people, for the planet. #GreenNewDeal

The resolution, which is not legally binding, calls for a sweeping transformation of the U.S. economy and American lifestyle–from ending air travel to retrofitting every building in the country to make them eco-friendly, guaranteeing jobs and health care.

Markey tweeted that the deal is “the new era of climate action”:

The sun is setting on the dirty energy of the past. Today marks the dawn of a new era of climate action. When we look back on today, this will be the moment we will be able to say that the political tide has turned on the rising seas. #GreenNewDeal pic.twitter.com/ISnlUS4vSr

We need massive renewable energy deployment. Wind, solar, offshore wind, storage batteries. Our energy future will not be found in the dark of a mine, but in the light of the sun.

We have acted on this scale before, and we must do it again. #GreenNewDeal

In keeping with the inexplicable talking point that there is a connection between climate change and one’s income, Markey added “wealth inequality” as a reason the Green New Deal is needed:

Global temperatures are the highest in recorded history.

Wealth inequality is at its highest point since the era of the Great Depression.

The interrelationship of these ills and injustices is undeniable. But the challenge is not insurmountable.

We can deliver a #GreenNewDeal.