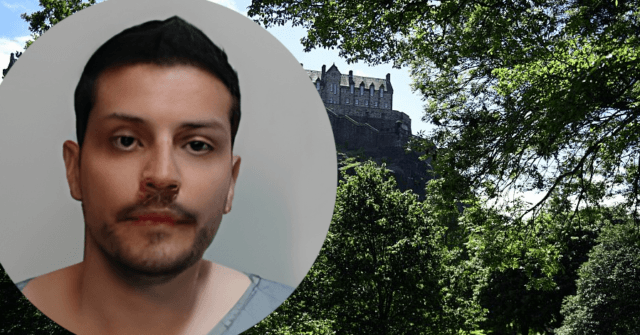 A Greek soldier-turned eco-terrorist has been jailed for eight years in the United Kingdom after being convicted for his attempt to blow up an Edinburgh park in 2018.

Nikolaos Karvounakis, 35, planted a nail bomb concealed in a cardboard box at a shelter in the famously picturesque Princes Street Gardens next to Edinburgh Castle in January 2018. It took Police Scotland nearly three years to locate the terrorist, eventually arresting him in December 2020. His DNA was found on components of the device.

“F*ck you all” was the message Nikolaos Karvounakis wrote on the flap inside the box containing the nail-bomb, and in court the prosecution highlighted how the former Greek serviceman self-described as a “lover of nihilist anti-political violence” and was a supporter of the anarchist Mexican terrorist group Individualidades Tendiendo a lo Salvaje (Individualists Tending to the Wild).

Upon discovery, the bomb was found to have a disconnected fuse and Karvounakis’ defence counsel argued that the former Greek terrorist only tried to cause disruption and not injure anyone, despite the bomb containing 58 nails and active explosives, the BBC reports. Perhaps given his denial that the bomb was meant to actually explode — despite, as the judge confirmed, all parts required for a bomb to explode being present — why exactly Karvounakis decided to attack a city park in the name of the environment has not clearly emerged.

ITS was described in court as supporting “acts of violence committed against people and or property in support of environmental causes”. Police described Karvounakis’ ideological beliefs as “unusual”.

Angela Gray, the prosecution’s advocate depute told the High Court in Edinburgh that had the “potentially viable” bomb detonated, “it would have the potential to cause significant injury and damage to property in close proximity”.

Six weeks after the device was discovered, Karvounakis sent an email titled “International Terrorist Group in UK” to the Edinburgh Evening News, which contained a link to an extremist website where the Greek terrorist had claimed responsibility for the attack using the pseudonym ‘Misanthropos Cacogen’ and attached a photo of the bomb in the park.

Supreme Court Judge Lord Peter Braid stated he would have jailed Karvounakis for ten years, but as he pled guilty he received the shorter sentence of eight years and four months under the Terrorism Act.

“The offence involved a high degree of culpability on your part as shown by the significant degree of planning,” Lord Braid said.

“Afterwards you appeared to exult in the commission in your claim of responsibility”, Braid continued.

Speaking to Breitbart London John Radley — who when he was just 21-years-old as a British soldier survived an IRA nail bomb attack outside of Chelsea Barracks in 1981 when a bus full of British troops was targeted by the IRA — condemned terrorist bombmaker Karvounakis, saying: “terrorism in whatever form or under whatever name is terrorism”.

Radley also said that he hoped that after Karvounakis “served his sentence, he is deported back to Greece”.

“There can be no tolerance for individuals who commit these crimes and who only show regret and remorseless once they have been caught and charged”, Radley asserted.

“I am thankful the IED did not activate however the public has to be lucky every day whereas these extremists only have to be lucky once”, said the veteran who was permanently injured after he was struck by multiple nails during the attack in 1981.