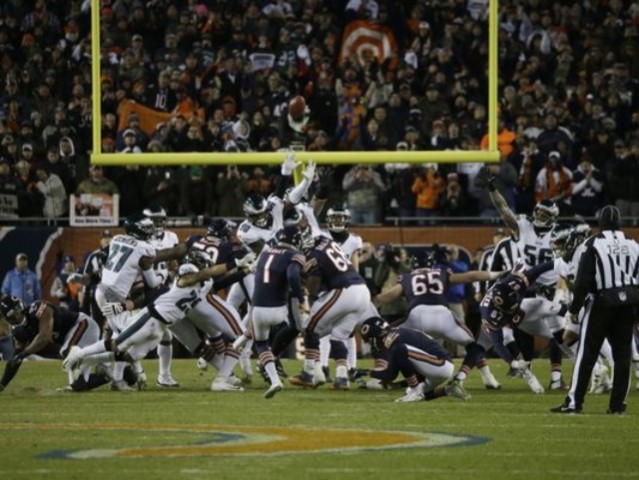 Jan. 7 (UPI) — Philadelphia Eagles fans were blowing up the Venmo cash app to give kicker Cody Parkey money after he missed a game-winning field goal for the Chicago Bears.

The Bears had a chance to go up 18-16 with 10 seconds remaining when Parkey stepped on the field for a 43-yard field goal attempt. He launched his first try, successfully splitting the uprights, but the Eagles called a timeout, negating the game-winning kick.

Parkey then stepped up for his final attempt. He smacked the football with his right foot, sending it toward the field goal, but the ball hit the left upright and bounced onto the crossbar, before falling forward, resulting in a loss.

It first appeared Parkey had missed the kick, but upon further review, Eagles defensive tackle Treyvon Hester got a piece of the football as it was going over the defensive line. The Eagles ended up with a 16-15 victory in the NFC Wild Card playoff game on Sunday at Solider Field in Chicago.

Bears fans booed Parkey as he exited the tunnel at Solider Field and other fans took out their frustration on Parkey via social media.

Dozens of Eagles fans decided to pick up their phones and send Parkey cash on Venmo.

“Good game, brother! Keep your head up,” one Eagles fan wrote, including an eagle emoji.