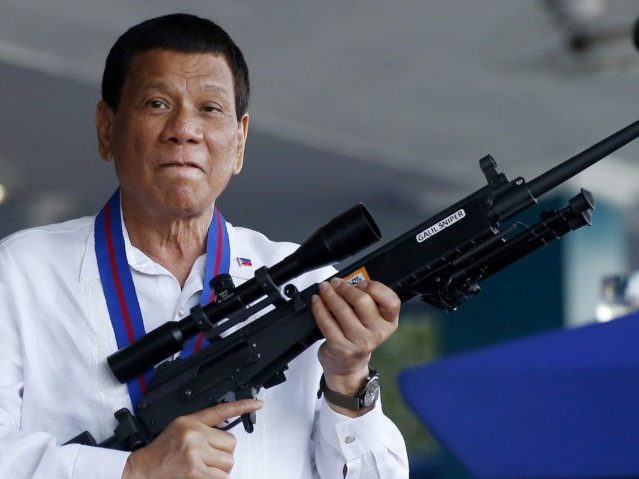 Philippines President Rodrigo Duterte used the occasion of an award ceremony for “Child-friendly Municipalities and Cities” on Wednesday to call on his population to “kill bishops” for being “good for nothing.” On Friday, at a labor event, Duterte disparaged priests as being “90 percent gay.”

Duterte regularly attacks the Catholic Church and its local clergy in routine presidential speaking engagements. He has repeatedly claimed to have been the victim of sexual assault at the hands of a priest as a child and gifted supporters copies of books detailing child sexual assault by Catholic clergy.

Duterte’s antagonism towards the Church has marred his popularity among constituents. The Philippines is home to one of the world’s largest Catholic populations and over 90 percent of the country identifies as Christian in some form. His remarks, however, immediately preceded the arrest of yet another priest in the country accused of dozens of instances of sexual assault and rape of children.

On Wednesday, Duterte remarked in Manila’s Malacanang Palace that “all [bishops] do is criticize” and encouraged their killing. According to the Philippine outlet Rappler, Duterte first stated that he did believe in God, regardless of his attitude towards the Church. He then added in Filipino, “but these bishops, kill them, those fools are good for nothing.”

At another event on Friday, this time dedicated to the 85th anniversary of the Philippines’ Department of Labor and Employment, Duterte called the Catholic Church “the most hypocritical institution.”

“You see, the pope said, ‘If you cannot be celibate, get out.’ Most of them, 90 percent of the priests (are gay),” Duterte said.

Presidential spokesperson Salvador Panelo assured reporters on Thursday that Duterte’s call to kill was “only hyperbole.”

“We should be getting used to this president. He makes certain statements for dramatic effect,” Panelo said, condemning Philippine bishops for triggering Duterte’s remarks.

“The president, just like any ordinary human being, is upset when the good things that he does for this country and not even appreciated by people who are supposed to support it, like the Church,” Panelo said.

The explanation did not appear to satisfy the Catholic Bishops’ Conference of the Philippines (CBCP). CBCP-Episcopal Commission on Missions (ECM) chairman Sorsogon Bishop Arturo Bastes told the Philippine Star that Duterte was a “megalomaniac” and “murderous madman,” urging the country not to “take his statements lightly from this time on.”

Fr. Jerome Secillano of the CBCP issued a statement urging bishops to use “prudence” with their words to protect their safety.

“What we need here is to exercise prudence in our words and actions. If we engage him in a word war, it might not end,” he advised.

On his remarks regarding gay priests, Bishop Broderick Pabillo told the Philippine Star that it was an “irresponsible accusation.”

“The sins of others do not make his own sins right,” he said.

Bishop Virgilio David, a frequent target of Duterte’s attacks, posted a reply to Wednesday’s tirade on Facebook consisting mostly of Biblical passages. He added, “We have already faced quite a lot of persecutions in the past two thousand years of Church history. We always respond the way Jesus would.”

Last month, Duterte accused David personally of being a drug abuser, without providing any evidence, and threatened to “decapitate” him.

“I’m telling you, David. I am puzzled as to why you always go out at night. I suspect, son of a whore, you are into illegal drugs,” Duterte said at an event observing the launch of a water supply project.

Duterte spent much of the summer making similar comments. In August, he told the nation’s bishops, “I will kick your ass,” a month after he promised to stop attacking God in his speeches, a vow prompted by dwindling approval numbers. His promise lasted less than a day.

Asked to explain his animosity towards the Church, Duterte has accused a local priest in his childhood of having sexually assaulted him. “It was a case of fondling—you know what—he did during confession, that’s how we lost our innocence early,” Duterte said in a 2015 interview. The priest in question, Father Mark Falvey, was an American who served the Church in the Philippines before returning home and dying in the 1970s. The Society of Jesus (or Jesuit order), of which Falvey was a member, subsequently confirmed that Falvey stood accused not only of molesting a young Duterte, but several American children whose identity has remained secret.

Child sex abuse has become an ongoing scandal for the Vatican, particularly in developing countries. On Wednesday, prior to Dutere’s call to “kill bishops,” American priest Kenneth Bernard Hendricks was arrested in the country for allegedly forcing between seven and 50 boys in the past three decades to bathe with him and molesting them. He had lived in the Philippines for 37 years. An Ohio court had issued an arrest warrant for him.