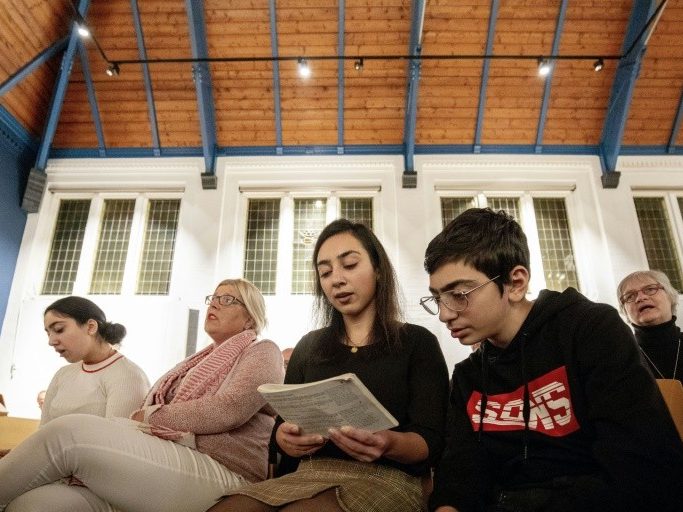 AP — A Dutch Protestant church which held round-the-clock services for 2,327 hours prevent a family from being deported declared victory on Wednesday.

The Bethel Church, a small chapel in The Hague, started the protest on October 26 to protect a family of Armenian asylum-seekers after the government announced changes to its immigration policy.

The 24/7 service was organised  to shield the Tamrazyan family – including the parents, their two daughters and a son – as Dutch law prohibits authorities from entering a church building while a service is underway.

The Bethel Church announced the end of its protest a day after the Dutch ruling coalition said it will review hundreds of asylum applications by children that previously were rejected.

‘We are incredibly grateful for a safe future in the Netherlands for hundreds of refugee families,’ church official Theo Hettema said.

At a news conference late Tuesday, the government minister in charge of immigration issues, Mark Harbers, said authorities will again review the cases of many children whose applications were rejected because they had not cooperated with efforts to send them back to their home countries. Dutch media reported that about 700 children will be affected.

‘The expectation is that a large number of the rejected children will be eligible’ for a residency permit, Harbers said.

On Wednesday, he told lawmakers that authorities will not deport any of the children or their families while the review is conducted.

The Tamrazyans have lived in the Netherlands for nearly nine years, as their asylum application and various appeals proceeded through the country’s courts. Last year, the country’s highest administrative court, ruled they must return to their home country, which is considered safe by the Dutch government.