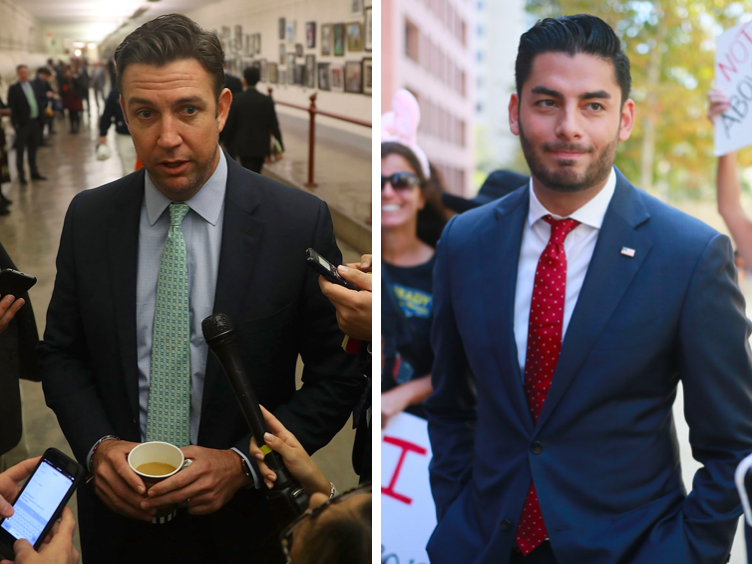 The results echo those of a SurveyUSA poll late last month, which also put Hunter ahead of Campa-Najjar, 47% to 39%.

Ammar is running an energetic campaign, with a strong social media presence and impressive fundraising. He is taking advantage of the fact that Hunter and his wife were recently indicted for alleged misuse of campaign funds.

However, the 50th district is so solidly Republican, and partisan divisions are so stark, that many voters are sticking with Hunter even if they think he is guilty.

Patrick Murray, director of the independent Monmouth University Polling Institute, said in a press release, “One in ten voters in this district think Hunter is probably guilty of campaign fraud, but they are going to vote for him anyway. I know this is a deep red district, but you’ve got to wonder if this isn’t taking partisan loyalty to a new extreme.”

One reason he might have wished to do so: Campa-Najjar’s grandfather was a terrorist who was involved in the murder of 11 Israeli athletes at the 1972 Olympic Games in Munich. His father was a Palestinian Authority official, and though he spoke out in favor of peace with Israelis, he also honored his own father’s actions. (Campa-Najjar himself has stressed his commitment to peace.)

Some of Campa-Najjar’s critics have claimed he is a Muslim. While he did attend an Islamic school in San Diego, Campa-Najjar reportedly converted to Christianity later, and appears proud of his Christian faith.

Recently, Campa-Najjar accused Hunter of racism for a comment he made at a campaign event, referring to Campa-Najjar’s name change (as quoted by the New York Times: ““That is how hard, by the way, that the radical Muslims are trying to infiltrate the U.S. government.”

Hunter also launched a campaign ad against Campa-Najjar that calls him a security risk, and refers to him as a “Palestinian Mexican millennial Democrat.”

Two things about this ad.

1.) It uses a talking head from One America News
2.) It leaves out the must-run text that ads need to include if they show candidates wearing military uniforms.https://t.co/zQvR4U3Xtw

In response, Campa-Najjar posted a video of his mother attacking Hunter’s claims — in Spanish:

As the battle in CA-50 intensifies, however, the polls seem stable — for now.