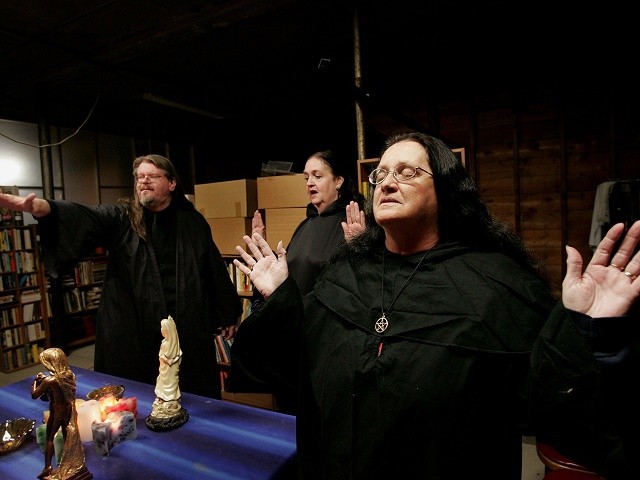 A large group of witches is meeting in Brooklyn this month to place a curse on Judge Brett Kavanaugh “and upon all rapists and the patriarchy which emboldens, rewards and protects them.”

“We will be embracing witchcraft’s true roots as the magik of the poor, the downtrodden and disenfranchised,” states a website advertising the October 20 event, “as often the only weapon, the only means of exacting justice available to those of us who have been wronged by men just like him.”

Approximately 1,000 people have said they will attend the sold-out event, which will also be live-streamed on social media. A quarter of the proceeds will be donated to abortion giant Planned Parenthood, organizers stated.

Brett Kavanaugh was sworn in as Justice of the Supreme Court last week after being accused of having attempted to sexually assault a schoolmate while in high school 36 years ago. The FBI conducted an investigation into the allegations, but its report revealed “no hint” of sexual misconduct.

Dakota Bracciale, a “queer, non-binary witch” living in Brooklyn, who is spearheading the event, told the Huff Post that witches use hexes as a radical act of resistance against oppressors.

“Witchcraft has been used throughout history as a tool and ally for people on the fringes of society who will not ever really get justice through the powers that be,” Ms. Bracciale said. “So they have to exact their own justice.”

Bracciale claimed that Brett Kavanaugh’s confirmation was proof that survivors of sexual assault often do not get justice by going through the courts, but witchcraft can offer the means of “exacting justice that would otherwise be denied to you.”

Bracciale distinguished a hex from a “binding” spell, which prevents someone from doing something and limits his ability to act. A hex, she said, is a more direct attack that engages its target in a supernatural fistfight.

In February 2017, a group of witches sought to use black magic to subjugate U.S. President Donald Trump by casting a “binding spell” to prevent him from carrying out his campaign promises.

The “mass spell to bind Donald Trump” was performed at midnight on February 24, and the group pledged to repeat the spell on every waning crescent moon “until Donald Trump is removed from office.”

Casting the spell entailed a lengthy incantation, calling on spirits and “demons of the infernal realms” to bind Trump so that “he may fail utterly, that he may do no harm.”

The witches gathering in Brooklyn this month will use photos and effigies of Kavanaugh, along with graveyard dirt and coffin nails to perform their curse. The ritual will take place at an occult bookstore and spiritual community space called Catland.

“Even if you don’t believe in the magic of it, you’re given the space and the affirmation, having your voice heard, feeling a sense of fellowship and camaraderie,” Ms. Bracciale said. “We’re putting out the message that you’re not alone, we’re not leaving you alone with the monsters.”