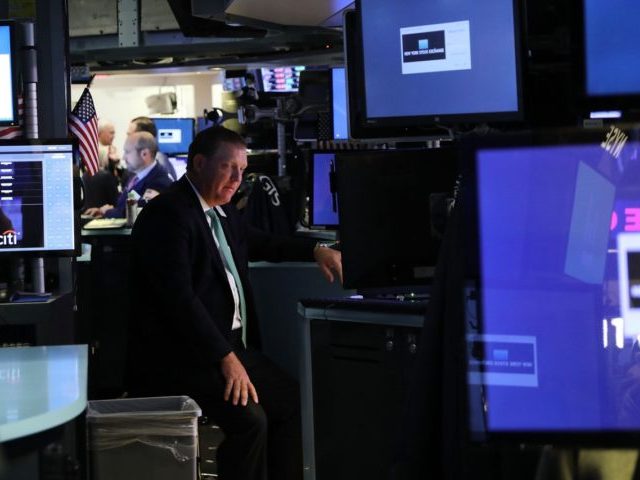 The Dow Jones Industrial Average fell 430 points Wednesday morning, or around 1.6 percent. The S&P 500 was off by 1.7 percent, putting it on pace for its first five-day losing streak in two years. The tech-heavy Nasdaq Composite was down by 2.4 percent.

Many investors now believe that the Federal Reserve’s campaign to “normalize” monetary policy, reversing years of extraordinary support that included the quantitative easing bond buying program and keeping its overnight target very low, will push interest rates higher than previously thought. That view has been fed by comments from Fed officials and signs that the economy is growing at a faster clip than forecast.

When investors expect rates to rise, the prices of bonds paying lower interest rates falls. Think of it this way, if the Treasury issues a $1000 bond paying 3 percent interest, investors will not pay $1000 for an older bond paying 2 percent interest. The price of the bond with the lower interest rate, known as its coupon, will fall enough to raise the yield to mirror the higher rate.

So bond yields, the return an investor realizes by owning a bond, move in the opposite direction of prices.  The 10-year U.S. Treasury note yield hit 3.214 percent, up from 3.208% a day earlier.

Rising interest rates make bonds more attractive relative to riskier stocks. Higher rates can also slow economic growth, making it more expensive for businesses to borrow and for consumers to spend. There have recently been several indications that the U.S. housing market has cooled, likely in part due to higher rates on mortgages.

Concerns over heightened tensions with China may also be hurting stocks. Bloomberg recently reported that hardware manufactured in China and used in the U.S. had been compromised with tiny spyware chips put in place by agents for the People’s Liberation Army. Chip makers were some of the hardest hit U.S. stocks on Wednesday.

The Treasury Department Wednesday issued new rules limiting foreign investment in U.S. companies, a move widely seen as aimed at restricting China’s access to sensitive U.S. technology. That is part of a broader move by the U.S. government to clamp down on China. Last week, Vice President Mike Pence gave a speech detailing China’s wrongdoing and announcing a policy that many say amounts to a declaration of a new Cold War. With so many U.S. companies tied to China through investments and supply-chains, escalating tariffs and other restrictions would likely to weigh on corporate profits in the short-term.

The Russell 2000, an index of smaller U.S. companies thought to have less exposure to China, was down by less than the big name indexes. It declined by just 1.4 percent.