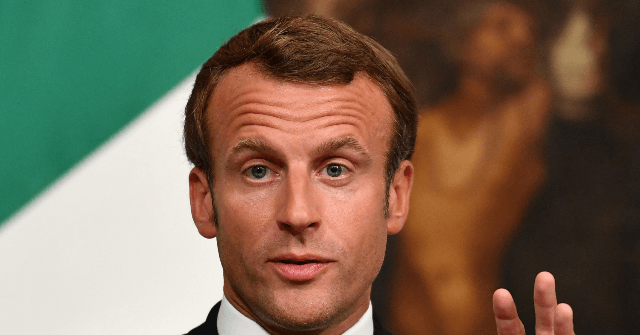 French President Emmanuel Macron is deploying experts to Saudi Arabia to investigate the origin of the attacks on major oil facilities that Washington and Riyadh blame on Iran, Paris said Wednesday.

The United States and Saudi Arabia have accused Iran of carrying out Saturday’s devastating attacks on two facilities operated by the Sunni kingdom’s state-run Aramco. Macron’s administration appears to doubt Iran’s involvement in the debilitating attacks. Iran also denies involvement in the assault on the two plants, which include the top petroleum processing facility in the world.

Saturday’s attack cut the Sunni kingdom’s oil production by half and took nearly six percent of global crude production offline. It is deemed the single worst sudden disruption to oil markets ever.

Macron’s offer to send experts into Saudi Arabia reportedly came at the behest of the Sunni kingdom.

Wednesday’s statement issued by the French presidential palace on the phone call with MBS revealed that Macron “strongly condemned” the attacks and assured Paris’s “solidarity with Saudi Arabia… in the face of these attacks,” adding:

In response to a request by the Saudi authorities, the president confirmed to the crown prince that France was sending experts to take part in investigations aimed at shedding light on the origin and nature of the attacks on September 14.

The statement failed to elaborate on the focus of Paris’s investigation in Saudi Arabia or who France blames for the attack.

Up to now France doesn’t have proof permitting it to say that these drones came from such and such a place, and I don’t know if anyone has proof. We need a strategy of de-escalation for the area, and any move that goes against this de-escalation would be a bad move for the situation in the region.

Moreover, Macron’s administration remains committed to diplomacy with Iran as a non-U.S. signatory to the 2015 nuclear deal, intent on saving the pact, even offering a $15 billion bailout to buy Tehran’s commitment.

While France appears to be taking a pro-Iran approach, the U.S. and the U.K. agreed to a “unified response” to the attacks on the Sunni kingdom’s oil giant, Al Jazeera points out. Initially, U.S. President Donald Trump showed restraint in responding to the Iranian attack, saying he was not interested in waging a new war. That position appears to have changed with the president saying all options are on the table. Trump also imposed substantial new sanctions on the Islamic Republic.

Saudi Arabia also indicated it is not interested in a conflict with Iran. Saudi Arabia’s envoy to London Prince Khalid bin Bander, told the BBC the attack was “almost certainly” Iranian-backed.

He added, “We’re trying not to react too quickly because the last thing we need is more conflict in the region.”

During his visit to Riyadh on Wednesday, U.S. Secretary of State Mike Pompeo accused Iran of perpetrating an “act of war” with the weekend strikes in Saudi Arabia.

Closely echoing Trump’s remarks about the attacks, U.S. Vice President Mike Pence tweeted, “I promise you: We’re ready. The U.S. is prepared. We’re locked and loaded and we’re ready to defend our interests & our allies in the region. Make no mistake about it”:

In the wake of this weekend’s unprovoked attack on several oil facilities in Saudi Arabia, I promise you: We’re ready. The US is prepared, we’re locked and loaded and we’re ready to defend our interests & our allies in the region. Make no mistake about it. https://t.co/THiXnlfxnz

In recent months, Macron has attempted to quell the growing crisis between Iran and the United States.

The attack on the Saudi oil facilities complicated those efforts, placing the French leader in an awkward position with the Sunni kingdom, a key regional ally. In the statement outlining the phone conversation between Macron and MBS, the French president reaffirmed to the Saudi leader “the engagement of France for the security of Saudi Arabia and stability of the region.”

Despite Iran retreating from full compliance with the nuclear deal by exceeding limits on uranium enrichment, France remains optimistic that the agreement could still hold.

France is one of the non-U.S. signatories — China, Russia, Germany, and the United Kingdom — that remains faithful to the controversial 2015 Iran nuclear deal between Tehran and world powers. President Trump pulled the U.S. out of the agreement in May 2018, reimposing economic sanctions against Tehran as part of a historical series of restrictions currently crippling the Shiite country’s economy.

Iranian-allied Shiite Houthi rebels in Yemen claimed responsibility for the drone strikes, but the U.S. and Saudi officials insist the attacks involved Iranian cruise missiles. Since March 2015, the Houthis and a Saudi-led coalition have been fighting a war in Yemen.

Yemen shares a border with southern Saudi Arabia. Houthi rebels have repeatedly carried out drone and other missile attacks into the Sunni kingdom.

The Sunni kingdom vowed to unveil evidence on Wednesday linking its regional foe Iran to the attacks.