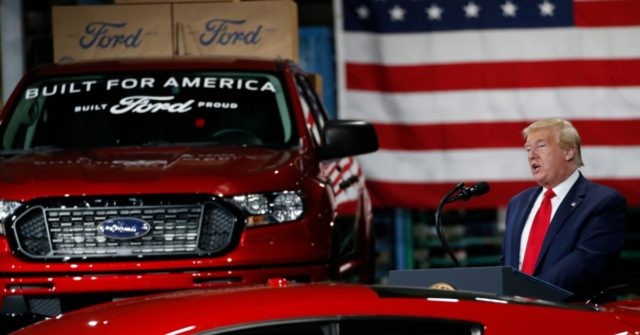 President Donald Trump visited a Ford manufacturing plant in Michigan on Thursday, but he also revisited his creed of “America First.”

“True national independence requires economic independence,” he said. “From day one, I’ve been fighting to bring back our jobs from China and many other countries.”

For Trump, the visit to Ford’s Rawsonville Components Plant was the perfect stage to recall the rich heritage of American manufacturing and how the company played a critical role in manufacturing planes for World War II.

Ford teaming up with General Electric to manufacture 50,000 ventilators, he said, was a similar act of national pride.

“Just like generations of Michigan manufacturers before you, each of you has done your best for America in its time of need,” Trump said. “You love your country.”

“We must produce critical equipment, supplies pharmaceuticals, technologies for ourselves,” he said. “We cannot rely on foreign nations to take care of us, especially in times of difficulty.”

The president noted his achievements on trade, replacing NAFA with the USMCA, renegotiating the trade deal with South Korea, and ending the Trans-Pacific Partnership. He also promised to keep the protective tariff for American pickups.

“The global pandemic has proven once and for all that to be a strong nation, America must be a manufacturing nation,” he said. “We’re bringing it back.”

For years, the president has mourned the loss of auto manufacturing in Detroit and other midwestern states, but he began his remarks noting Ford was already hiring 2,000 additional workers to build the new Ford Bronco.

“Your patriotism cannot be outsourced,” he said. “Your 117 years of incredible manufacturing heritage cannot be replicated anywhere else in the world.”

Trump marveled that autoworker unions were not endorsing him for president, despite everything he had done for the industry.

“I don’t know how the hell these unions aren’t endorsing Trump instead of the standard Democrat,” he said referring to former Vice President Joe Biden. “A Democrat that doesn’t even know where he is.”