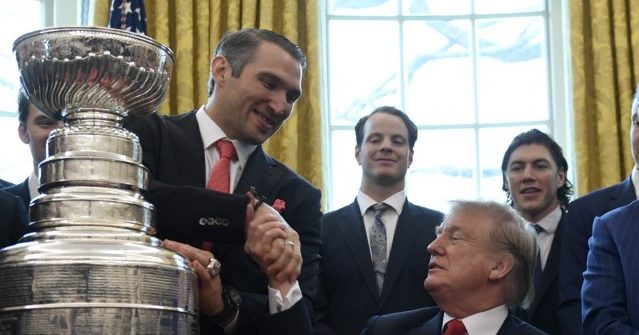 The president fit the entire team into the Oval Office and placed the Stanley Cup on the president’s desk as he congratulated them for their success in the 2018 season.

“They’re winners, they know how to win,” Trump said. “You had a truly incredible last season last season.”

Trump recalled that many on his staff were Capitals fans, including his daughter Ivanka Trump.

“You brought the Stanley Cup home. Thousands of adoring fans greeted you. They were all over the place,” he said. “And I have a feeling you’re going to be doing it again. You’re champions. You have a champion’s heart.”

The president singled out Russian NHL player and team captain Alex Ovechkin, calling him by his nickname “Alexander the Great.”

“Alexander the Great,” they call him, has spent his entire 13-year NHL career with the Washington Capitals. And his hard work and loyalty has paid off last season. He outscored every player in the league,” Trump said. “Wow. That’s not bad. Right?”

“It’s an honor to have the Washington Capitals here. You’re winners, in the highest sense,” he said. “It’s very tough to win. It’s very tough to go through all those teams. And I really tell you, I think you’re going to have an awfully good chance of doing it again.”
Team owner Ted Leonsis called the event a “real thrill” and and “great honor” and thanked the president for welcoming them to the White House.

“It’s a great honor to be here in the Oval Office. And the team is very, very respectful to the process and what it takes to win,” he said. “And we hope to make the community in Washington, D.C. proud and try to do it again this year.”

Ovechkin said that he was also a “huge honor” to be at the White House.

“Thank you very much for having us. It’s a huge honor for us to be here and meet you personally,” he said. “And, you know, we’re going to try to do it again.”