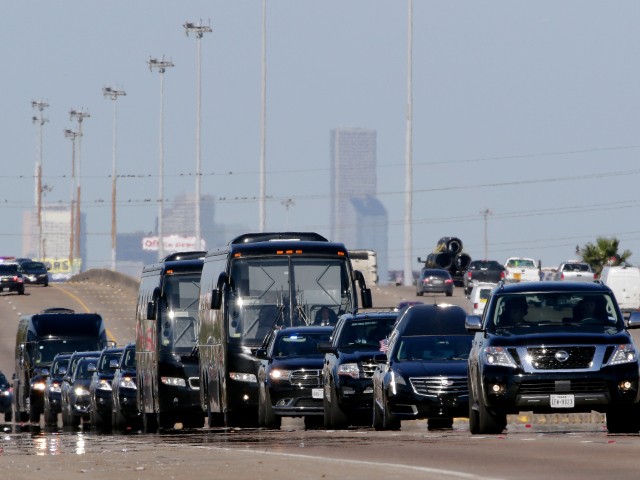 President Donald Trump welcomed the family of former President George H.W. Bush to Washington, DC, on Monday for the funeral of the nation’s 41st president.

The president invited the Bush family to stay at the Blair House, a residence across the street from the White House, usually reserved for visiting heads of state. Former President George W. Bush’s motorcade was spotted arriving at the residence Monday night.

Trump indicated he would personally visit the family on Tuesday.

“Looking forward to being with the wonderful Bush family at Blair House today,” he wrote on Twitter.

Trump also announced that first lady Melania Trump would welcome former first lady Laura Bush to the White House for a tour of the Christmas decorations.

“The elegance & precision of the last two days have been remarkable!” Trump said.

The president and first lady traveled to the Capitol on Monday evening to pay their respects to President Bush, as his remains were honored at the Capitol Rotunda:

Looking forward to being with the wonderful Bush family at Blair House today. The former First Lady will be coming over to the White House this morning to be given a tour of the Christmas decorations by Melania. The elegance & precision of the last two days have been remarkable!