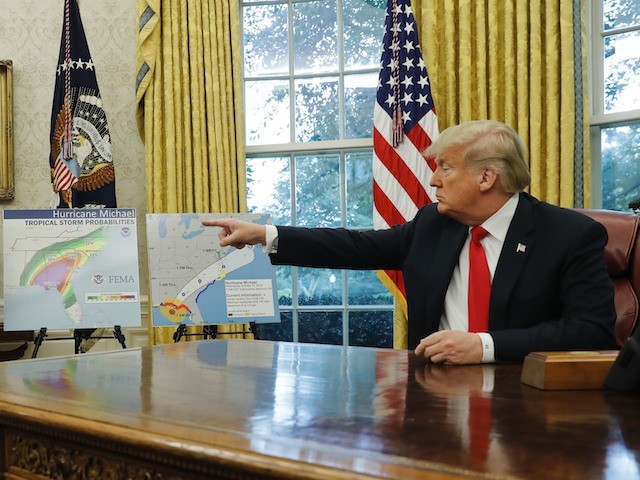 President Donald Trump hosted a briefing on the federal response to Hurricane Michael, a storm that surprisingly gained strength as he began to make landfall on Wednesday.

“This started out very innocently a week ago, this was a small storm in an area they never thought … they said, it grew into a monster,” Trump said as he spoke with reporters in the Oval Office with FEMA administrator Brock Long and DHS Secretary Kirstjen Nielsen.

The Category 4 storm has already started making landfall on the Florida panhandle with winds of up to 150 mph as of Wednesday afternoon.

Long said that it was the most intense hurricane to hit the area since the 1800s and predicted “a lot of damage and devastation” in the area.

“It’s almost the entire size of the gulf,” Trump marveled, pointing at the image on the charts.

Long said many Floridians in the path of the hurricane did not have time to heed the evacuation warnings, but that Florida Governor Rick Scott pushed hard to get the message out.

Trump noted that many of the people in the area were poor, so it was difficult for some people to evacuate. He said that the government sent buses to help evacuate.

“It’s very tough for them to leave, that’s one of the problems that you’re finding,” he said.

Trump said he would “probably” still go to his rally in Pennsylvania scheduled for Wednesday night, noting that many of his supporters were already in line.

“I don’t know what to do, because you have so many people already there,” he said. “It’s sort of unfair to them. So it’s a mix. I’ll be totally focused on this.”

Trump said that he had “great people” working on the storm response, but that he might want to oversee the process himself.

He said that he would likely tour the storm response on either Sunday or Monday.