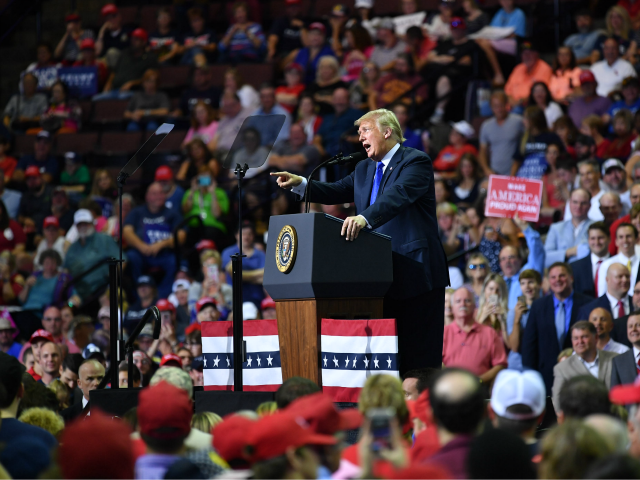 “These are really evil people, and then you see the people that are doing it. I could tell you stories about every one of them,” Trump said during a campaign rally in Mississippi.

He mocked “Da Nang” Sen. Richard Blumenthal, noting that “cried like a baby” when he was caught lying about his record of service in Vietnam.

“He only lied for 15 years … now he talks about lying?” Trump said. “Blumenthal is a fraud and reason he got elected is because in Connecticut it’s impossible for a Republican to get elected.”

He ridiculed Sen. Corey Booker, as a former mayor who “destroyed” the city of Newark, New Jersey.

“See what he wrote himself about women,” Trump said, referring to a column where Booker admitted to groping a friend when he was young.” Check it out, folks.”

He also challenged her denial of leaking the identity of Kavanaugh’s accuser Christine Ford.

“That was the worst body language that I’ve ever seen,” Trump said, imitating Feinstein’s shaky denial in the Senate.

He also ripped Sen. Patrick Leahy of Vermont, accusing him of excessive drinking.

“Oh, he’s never had a drink in his life,” Trump joked. “Check it out. Look under Patrick Leahy slash drink.”

Trump also named Sen. Bob Menendez of New Jersey, but added, “I’ll leave him alone, because we can’t cover too many of these characters, right?”

Trump warned that if Democrats took the Senate, it would be catastrophic to his effort to make America great again.

“If Democrats get 51 seats the key Senate committees will be run by the far left Bernie Sanders,” Trump said. “Crazy Bernie!”

“What a group what a group. Holier than thou, aren’t they?” Trump concluded.