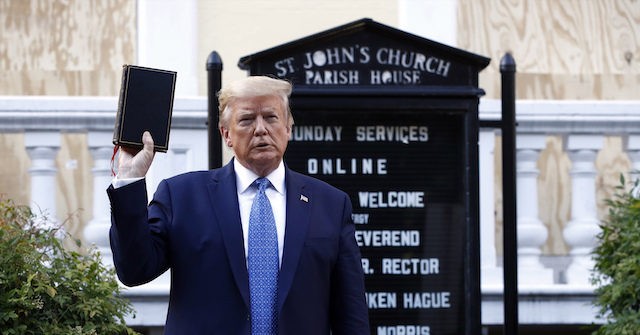 President Donald Trump in an interview on Wednesday defended his decision to visit a burned church next to the White House on Monday, despite police forcing protesters out of Lafayette Park.

The president spoke about his decision to visit the burned historic St. John’s Episcopal Church in a radio interview with Fox News host Brian Kilmeade. Violent protesters set a fire in the basement of the church on Sunday during widespread violence, vandalism, and looting in Washington, DC.

“The church leaders loved that I went there with the Bible,” he said.

The president pointed to Evangelical pastors like Franklin Graham and Robert Jeffress who praised his decision to visit the church.

He noted that the “fake news” and the Democrats would never appreciate what he was trying to symbolize.

“It’s only the other side that didn’t like it, the opposition party,” he said and added, “The fake news makes everything look bad no matter what you do.”

Trump said he knew the church was boarded up after the fire, but wanted to go there anyway to demonstrate his support.

He said he was unaware that the protesters had to be forced out of Lafayette Park for him to walk to the church but disputed that they were all peaceful.

“I heard how nice and wonderful the protesters were,” he said. “Really? Then why did they burn down the church the day before?”